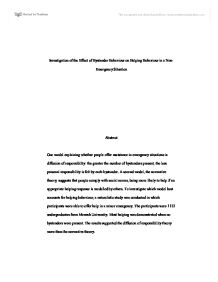 One model explaining whether people offer assistance in emergency situations is diffusion of responsibility: the greater the number of bystanders present, the less personal responsibility is felt by each bystander. A second model, the normative theory, suggests that people comply with social norms, being more likely to help if an appropriate helping response is modelled by others. To investigate which model best accounts for helping behaviour, a naturalistic study was conducted in which participants were able to offer help in a minor emergency. The participants were 1122 undergraduates from Monash University. Most helping was demonstrated when no bystanders were present. The results supported the diffusion of responsibility theory more than the normative theory.

In 1964, a New York city woman Kitty Genovese was brutally stabbed to death outside her apartment block. Of the 38 witnesses, none offered assistance, not even the simple act of notifying the police (Latane & Nida, 1981). This failure to help stimulated research into understanding why bystanders often fail to give assistance in emergency situations.

Latane and Darley (1970) wondered why people were unwilling to offer assistance in emergencies when they were quite happy to help in non-emergencies. They suggested a five-step model explaining what a bystander must do in order to help.

Stage 1. Recognise that an event is occurring.

Stage 2. Interpret the event as an emergency.

Stage 3. Decide that he or she has a personal responsibility to help.

Stage 4. Consider what form of help he or she can give.

Explanatory theories for helping behaviour can be tested by creating an emergency situation and examining the unprompted helping behaviour given by naïve participants. To model the Kitty Genovese case, Latane and Darley (1970) created an emergency situation in which a number of bystanders were all able to provide help, but were unable to communicate with other bystanders or know the behaviour of the others. The results of this experiment suggested that as the number of bystanders present increased, the probability of any one bystander trying to help decreased (Latane & Darley, 1970). Many further studies by Latane, Darley and others, conducted with a wide variety of emergency situations, participants and levels of communication between bystanders, support this diffusion of responsibility hypothesis (Latane & Nida, 1981). When participants can communicate with each other, pluralistic ignorance can result – a majority of people in a group privately reject the group norm, but erroneously assume that most other people accept the norm (Brehm & Kassin, 1996). In an emergency situation, people look around, and may take the hesitancy of other bystanders as indicating that the situation isn’t an emergency. Asch (1999) suggests that our desire for social conformity is cause for concern, because individuals are prepared to disregard their own sound judgement and take on the majority view even when the majority is obviously wrong.

Bryan and Test (1967), however, suggest that the presence of others does not necessarily inhibit helping. In an emergency situation, whether people help is influenced by how others react, not solely by whether others are present. They suggest that the likelihood of helping behaviour can be increased if an appropriate helping response is modelled by others. In their naturalistic study, a woman was unable to change a tyre on the side of a highway. In the first situation, participants had observed a man helping a different woman change a tyre earlier along the road. In the second situation, no such model was provided. Bryan and Test found that a greater proportion of participants helped the woman in the first situation. This suggested that an observer will feel more social obligation or responsibility to help if he or she witnesses an observer helping than if there were no other bystanders. In fact, a greater feeling of social responsibility resulted. An observer seems likely to help when a model responds to a possible emergency situation by helping, following a social norm for responding to the situation (Bryan & Test, 1967).

Cialdini, Reno, and Kallgren (1990) conducted research which demonstrated that social norms impact considerably on littering behaviour. People take the behaviour of others as cues as to how they ‘should’ feel or behave in certain situations.

The aim of the present study is to determine which of the two competing theories, the diffusion and normative theory, best accounts for helping behaviour.


Materials
100 A4 pages of loose-leaf paper.

The diffusion theory predicts a decrease in helping behaviour when a bystander is present. The results supported the diffusion theory, as more participants demonstrated helping behaviour in the no-confederate condition compared to the two confederate conditions. The results suggest that the presence of bystanders in a mild emergency situation inhibits the likelihood of a helping response.

However, a higher proportion of participants helped in the no-confederate condition than in the helping-confederate condition. This result may challenge the normative theory, which suggests that the participant would be more likely to help after seeing a model of helping behaviour than if no bystander were present (Bryan & Test, 1967).

However, dropping papers is far milder than the emergency situations used in traditional experiments and studies investigating the diffusion of responsibility and normative theories. In the helping-confederate condition, it may be that no further help by the participant was likely to be of any use – the task of picking up the papers could be easily completed by two people: the confederate and the experimenter. In such circumstances, the participant would not feel compelled to help despite seeing a model of helping behaviour.

The internal validity of the experiment might be affected by subject variables such as gender and age, which were not controlled or recorded. Also the methodology may not have been consistent, as different experimenters conducted the trials. One example of this is the skill level of the experimenter in dropping the papers. Participants’ reactions may differ according to the manner in which the papers were dropped; for example, a spectacular dropping of papers spanning a wide area may affect participants differently than if the accident was more localised. Also the level of distress or embarrassment portrayed by the experimenter may not have been constant.

The use of opportunistic sampling is likely to have compromised external validity because the participants chosen may not have been representative of the university population. For example, since it was preferable that no other people other than those privy to the experiment and the participant were present, people walking on their own were selected as participants. This may have resulted in an overrepresentation of certain personality traits in the participants.

It would be interesting to see whether the differences between the three conditions were similar at the Australian and Malaysian campuses. The Malaysian (Sunway) campus may have a more collectivist culture than Australian campuses. Poor consistency between campuses would indicate low external validity.

This experiment could also be improved by changing the situation so that in the confederate conditions, extra help by the participant would be of significant benefit.

The implication of the results is that helping behaviour may not be governed by our moral characters, but by simple social mechanisms. With this in mind, perhaps we can better recognise why people fail to comply with moral expectations. Experiments like these may promote greater tolerance of the behaviour of others, if we are able to recognise that a large part of a person’s response is based on their situation, rather than on their character traits (Harman, 1999).