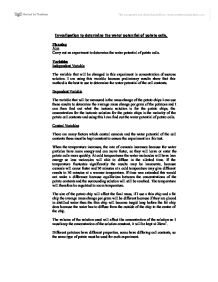 Investigation to determine the water potential of potato cells.

4. Using blotting paper blot each side of each chip for 3 seconds. 5. Weigh each chip on the balance; take a reading to 2 significant figures. 6. Place 1 chip in each boiling tube; record the destination of each chip with its initial mass. 7. After 30 minutes remove the chips from their solutions and blot each side of each chip for 3 seconds. 8. Weigh each chip again and calculate the average mass change per gram for each concentration. Diagram of apparatus Safety Care must be taken when using the knife as it is very sharp and can be dangerous. No pieces of potato will be dropped as they can make the floor slippery and hazardous. The worktop must be cleaned after use as it may become sticky and damage other users work. Any spillages must be cleaned promptly to prevent injury from loss of balance. Explanation of method The experiment will be carried out twice, so the average mass change per gram can be taken from two different chips, this can show up any anomalies and make the results more accurate. A knife is used because it is sharp enough to cut the potato and I am responsible enough to use it safely. Preliminary experiments have shown that the size I have selected is sufficient to show a significant mass change, the potato borer is used as it is easier to make smaller chips after using this. Any excess cell sap can be removed by blotting, because otherwise the results may be inaccurate, the chips must not be squeezed because this will reduce the mass and change the results. ...read more.

There are possible improvements to the method I believe leaving the chips in the solution for longer would increase the amount of mass change which would give a more defined graph and results. I believe that using a very strong sucrose solution would completely plasmolyse the potato chips. If I tried this and worked out the difference in mass between the turgid potato chip and the plasmolysed chip I could also work out the volume of water the potato chips can hold and the volume of water in the potatos at standard temperature and pressure. To know which results were the ones for the plasmolysed and turgid chips I would have to wait until the graph gave a horizontal line which indicates that there was no change in mass over two consecutive results. The first result for 0.2 M sucrose solution seems to be anomalous as it does not fit in very well with the other results as shown by the graph. Both of the sets of results show a steep decrease in mass at 0.6M so I decided that this was not an anomaly. Apart from this anomaly I believe that the results are reliable and I believe that my conclusion that 975KPa is the water potential of the potato cells is accurate. There are many further investigations I could carry out, such as investigating the water potentials of carrots and other root vegetables, measuring the extension and reduction of the potato chips length after immersion in the sucrose solution. There is also the alternative of using sodium chloride instead of sucrose, though there may not be very much difference. ...read more.