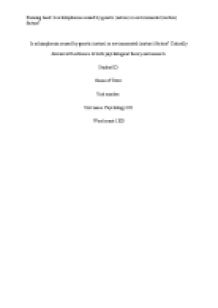 Is schizophrenia caused by genetic (nature) or environmental (nurture) factors? Critically discuss with reference to both psychological theory and research.

(Cui D, et al, 2015). Most evidence comes from research using family studies and in particular the twin research. The twin research has shown over the years consistently that identical twins have a greater risk of developing schizophrenia, if their twin has the disorder, than non-identical twins. Monozygotic twins have a high possibility to develop schizophrenia and have a concordance rate at the range of 42 48% compared to dizygotic twins, 17 -18% concordance rate. (Gilmore, John H. 2010), (Jay, J 2004). Some researchers argue that since monozygotic twins are born at the same time, they get treated similarly, and are often raised in a similar environment. The implication for this is that concordance rate between twins cannot be reliable according to this argument because if schizophrenia were genetically inherited then concordance rates should be closer to 100% as the twins would have been treated similarly; then we could argue that environmental factors can be an explanation of the cause of schizophrenia in a pair of monozygotic twins: the same can be mentioned for first degree relative because they will still share a similar environment which could provide an explanation for concordance rates. (?agud, M, 2009), (Seglem, K et al, 2015). A number of researches on adoptions support the claims that genetic factors play a part in the development of schizophrenia. ...read more.

According to (Karayiorgou, M,, 2010). Contracting disease like flu or syphilis in the womb may lead to developing schizophrenia in later life. For example people give birth to more schizophrenia in the winter when the weather temperature is at zero or below zero degrees. Kanahara, N, (2015) posits that Psychotic syndromes can be understood as disorders of adaptation to social context. Although heritability is often emphasized, onset is associated with environmental factors such as early life adversity,growing up in an urban environment, minority group position and cannabis use, suggesting that exposure may have an impact on the developing 'social' brain during sensitive periods. Therefore heritability, as an index of genetic influence, may be of limited explanatory power unless viewed in the context of interaction with social effects. (Van Os, Jim, U Maastricht, 2009) Childhood abuse has been implicated as an environmental factor that increases the risk for developing schizophrenia. A study found that abuse may be a risk factor for schizophrenia in women, but not men. Violence against women is a major public health problem. Women with a diagnosis of schizophrenia suffer higher rates of violence compared with women without mental illnesses. Rice, E, 2006). In conclusion, a lot of evidence support a strong genetic components responsible for the basis of schizophrenia. No single cause of the disorder has yet been identified. In this essay we would support the Diathesis?stress model as available evidence suggest a complex interplay of genetic and environmental factors. ...read more.