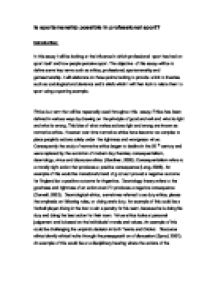 Is sportsmanship possible in professional sport? Introduction: In this essay I will be looking at the influence in which professional sport has had on sport itself and how people perceive sport. The objective of this essay will be to define some key terms such as ethics, professional, sportsmanship and gamesmanship. I will elaborate on those points looking to provide a link to theories such as sociological and deviance and beliefs which I will then look to relate them to sport using a sporting example. Ethics is a term that will be repeatedly used throughout this essay; Ethics has been defined in various ways by drawing on the principle of good and evil and what is right and what is wrong. This idea of what makes actions right and wrong are known as normative ethics. However over time normative ethics have become too complex to place people's actions solely under the rightness and wrongness virtue. Consequently the study of normative ethics began to decline in the 20th century and were replaced by the evolution of modern day theories; consequentialism, deontology, virtue and discourse ethics (Gardiner, 2005). Consequentialism refers to a morally right action that produces a positive consequence (Lang, 2006). An example of this would be maradona's hand of god as it proved a negative outcome for England but a positive outcome for Argentina. Deontology theory refers to the goodness and rightness of an action even if it produces a negative consequence (Darwall, 2003). Deontological ethics, sometimes referred to as duty ethics, places the emphasis on following rules, or doing one's duty. An example of this could be a football player diving in the box to win a penalty for his team, because he is doing his duty and doing the best action for their team. Virtue ethics looks at personal judgement and is based on the individuals' morals and values. An example of this could be challenging the umpire's decision in both Tennis and Cricket. ...read more.

By 1945 there was only an 80/20 split in the figures leaving only 20% of cricketers amateur. Denis Compton believed "the amateur cricketer was dying out because he was not able to afford the time involved. Only men with well-established parents were able to take part: it had become an economic problem to be amateur." Cricket became commercialised in 1963 when a new tournament was founded in order to gain some extra revenue it was named the 'Gillette cup 'now a world famous shaving brand they provided �6,500 in sponsorship (Polley, 1998). However this was unsuccessful at the time as there was not enough interest. "However, the qualitative and quantitative shifts in commercial influence over the last fifty years have been little short of phenomenal" (Polley, 1998, p.64). Amateur players are said to play the game for their own enjoyment and receive no benefits such as, money, equipment, or any other things which could be deemed to class them as a professional. However modern day amateur athletes who compete in amateur tournaments, games and competitions are often receiving a reward of some sort, whether it is money, sponsorship deals or equipment these could be seen as benefits that a professional may get (Barnes, 2006). This brings shamateurism into the equation, shamateurism is a controversial term as it refers to an athlete who is classified as an amateur, competing against amateur's receiving benefits or money which is not legally documented which may give them an unfair advantage over amateurs who do not receive these rewards. The term shamateurism came about as these people found to be doing this are said to be making a 'sham' of the games they are competing in and the whole amateur philosophy. "W.G Grace was the inventor of shamateurism" (Barnes, 2006). An example of this is golfer Roy Mcllroy who retained his amateur status however participated in professional golf tournaments with the world's leading golfers. ...read more.

"Modern athletics, particularly the Olympics, exhibit ambivalence on the question of professionalism in sport. The desire for amateurism- competition for its own sake- runs smack into economic realities: athletes must eat, and they also have to find a way to pay for their training" (Miller, 2004, p.207) Many statements from coaches and players are based around the idea of winning and based on only the result, sport has now become a business and top football teams are sought after and regarded very much as a business. People's livelihoods are at stake now based on results and performances and will do anything to get the result they need to still be employed whether it means cheating, trash talk or simply not conforming to the unwritten rules, such as, kicking the ball out of play if a player is injured. I think professionalism has aided the games development and understanding, while there is an argument that it has caused conflict, it is also seen as a universal language and a bridge which people can cross and understand one another, meaning we can socialize and integrate with many people. Competition in sport is healthy and should not be seen to 'destroy sport as Barnes (2006). Competition is what separates sport from an activity. The will to win and the competitive nature is evident in all sports players, irrespective of their status. Sportsmanship is not only a thing of the past in professional sport it is now disappearing as a win at all costs mentality is becoming apparent in all forms of sport as the term shamateurism has been defined which brings all forms of the game into disrepute (Coakley, 2009). Many amateur teams are now very competitive as the success of the club can bring in revenue to enable new facilities. An example of this is the F.A cup in football where amateur and semi-professional teams earn revenue from gate receipts and winning bonus which enables them to compete and travel to matches. ...read more.