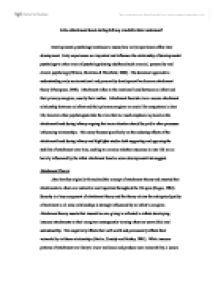 Is the attachment bond during infancy crucial to later outcomes?

Is the attachment bond during infancy crucial to later outcomes? Developmental psychology continues to assess how early experiences affect later development. Early experiences are important and influence the relationship of developmental psychology to other areas of psychology during adulthood such as social, personality and clinical psychology (Waters, Hamilton & Weinfield, 2000). The dominant approach to understanding early socioemotional and personality development has become attachment theory (Thompson, 2000). Attachment refers to the emotional bond between an infant and their primary caregiver, usually their mother. Attachment theorists view a secure attachment relationship between an infant and their primary caregiver as crucial for competence in later life, however other psychologists take the view that too much emphasis is placed on the attachment bond during infancy arguing that more attention should be paid to other processes influencing relationships. This essay focuses specifically on the enduring effects of the attachment bond during infancy and highlights studies both supporting and opposing the stability of attachment over time, seeking to examine whether outcomes in later life are as heavily influenced by the infant attachment bond as some developmentalists suggest. Attachment Theory John Bowlby originally formulated the concept of attachment theory and asserted that attachments to others are instinctive and important throughout the life span (Kagan, 1984). Security is a key component of attachment theory and the theory claims the anticipated quality of treatment in all close relationships is strongly influenced by an infant's caregiver. Attachment theory asserts that insensitive care giving is reflected in infants developing insecure attachments to their caregiver consequently viewing others as unavailable and untrustworthy. ...read more.

If this is the case, it suggests that recent rather than early patterns of parent-child interaction may determine the differences in attachment stability and that the long-term effects of early attachment are less influential than predicted by attachment theory. Thompson (2000) found that children vary considerably in the extent to which early attachment relationships have an enduring impact, highlighting that reasons for individual patterns of continuity or change are not clear. This study found that changing family circumstances and how they impact on the quality of parenting influence the extent to which early attachments are enduring. "Broader family processes and the adult's adaptive capacities may either exacerbate or buffer the impact of family stresses on early child-parent attachment" (Thompson, 2000). To further interpret these findings exploring the child's temperamental vulnerability or adaptability may shed some light in understanding how family events impact the attachment relationship. Temperamental theories highlighting the role of anxiety levels While attachment theorists have made important contributions to current views of early experience and individual differences, temperament theorists argue that more attention should be paid to individual temperamental properties as these play a vital role in determining a child's vulnerability to anxiety levels, which in turn affects how their quality of attachment is viewed in the Strange Situation. Kagan (1984) argues that infants with high and low levels of vulnerability to anxiousness will be viewed as insecurely attached. Infants with high levels of anxiousness would become extremely distressed by the Strange Situation and infants with low levels of anxiousness would not be frightened by the unfamiliar (or the Strange Situation), with both groups consequently being classified as insecure. ...read more.

Looking at other dimensions to see how developmental changes affect the pattern of individual differences in parent-child relationships is important to further understanding stability and change in attachment over time. Conclusion It is clear that developmental psychology must not underestimate the enormous contribution that attachment theory has made to understanding socioemotional behaviours or to the importance of the attachment bond during infancy. Recognising that secure attachment relationships are a huge contributor enabling people to explore the world during all stages of life, but also appreciating the adaptability and flexibility of the human brain to adjust to different circumstances, it is not obvious from the evidence reviewed here that being securely attached as an infant is beneficial to later socioemotional functioning indefinitely. The evidence reviewed for this essay found mixed results in relation to stability of attachment, with some studies indicating relative stability over time, and other studies showing significant instability. The evidence suggests that a secure attachment during infancy is more likely to produce positive later outcomes, however consistently the research questions whether later outcomes are actually the result of a secure infant attachment relationship, or whether later outcomes are related to other variables such as temperament and stable family and environmental circumstances. Evidence here reveals that early experiences are most predictive of later socioemotional outcomes only when the combination of very stable environmental conditions and family stability are present. Overall, the evidence seems to be more heavily weighted to suggesting that there is more change in attachment over time than attachment theory suggests, and that while the attachment bond during infancy in important, it is not realistic to view it as 'crucial' for later outcomes. ...read more.