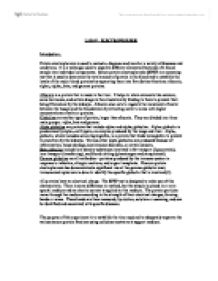 LAB #7 : ELECTROPHORESIS Introduction : Protein electrophoresis is used to evaluate, diagnose and monitor a variety of diseases and conditions. It is a technique used to separate different elements (fractions) of a blood sample into individual components. Serum protein electrophoresis (SPEP) is a screening test that is used to determine the total amount of protein in the blood and to establish the levels of the major blood proteins by separating them into five distinct fractions: albumin, alpha1, alpha2, beta, and gamma proteins. Albumin is a protein that is made in the liver. It helps to retain elements like calcium, some hormones, and certain drugs in the circulation by binding to them to prevent their being filtered out by the kidneys. Albumin also acts to regulate the movement of water between the tissues and the bloodstream by attracting water to areas with higher concentrations of salts or proteins. Globulins are another type of protein, larger than albumin. They are divided into three main groups : alpha, beta and gamma. Alpha globulins are proteins that include alpha1 and alpha2 globulins. Alpha1 globulin is predominantly alpha1-antitrypsin, an enzyme produced by the lungs and liver. ...read more.

5. Under the fume hood a 5% solution of aqueous acetic acid was prepared, using 50 mL of glacial acetic acid added to approximately 500 mL DI water in a 1 L volumetric flask. The acid was added to the water, which was then topped up to the mark with more DI water. This was capped and inverted 24 times to mix. 6. The acetate strips were removed one at a time from their bath and blotted on absorbent paper, but not allowed to dry. The strips were then draped across the supports in the electrophoresis chamber and held into place by magnets in such a way so that only the ends of the strips touched the buffer solution. 7. Using the sample applicator a sample of 1L Test SeraChem level 1 [(human)(Lot N1054503 exp July'97)] was applied to each strip at the pencil mark on the left side. The chamber was then covered with the plastic lid. 8. The power was turned on and voltage set to 250 volts. 9. The buffer used to soak the acetate strips was poured back into the bottle for reuse. ...read more.

There is also the fact that we had never used this type of equipment before and could have done with a little more practice in the application of the sample. Another factor that could have made a difference would be the amount of the voltage used. While the minimum called for was 220 volts, we used 250 volts, but recommended range went up to 300 volts. There are several factors which can affect the electrophoretic mobility : the strength of the electrical field, the size of the protein molecules, their net charge, the nature of the conducting fluid (pH) and the nature and type of support (paper, agar, acrylamide gel, agarose or cellulose polyacetate). As electrophoresis is a diagnostic tool for specific diseases, the sample can also cause differing mobilities as the amounts of the proteins involved increase or decrease. For example, a decrease in albumin with a rise in the apha2 globulin usually indicates an acute reaction of the type that occurs in infections, burns, stress, or heart attack. On the other hand, a slight decrease in albumin, with a slight increase in gamma globulin, and a normal alpha2 globulin is more indicative of a chronic inflammatory condition, as might be seen is cirrhosis of the liver. (1) Reference : 1) FLORES, JANIS O. "Protein electrophoresis" www.findarticles.com/cf_dls/g2601/0011/2601001128/p1/article.jhtml November 3, 2002 ...read more.