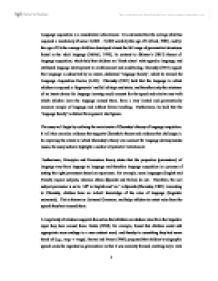 Language acquisition is a considerable achievement.

Language acquisition is a considerable achievement. It is estimated that the average child has acquired a vocabulary of some 14,000 - 15,000 words by the age of 6 (Clark, 1991), and by the age of 21/2 the average child has developed almost the full range of grammatical structures found in the adult language (McNeil, 1970). In contrast to Skinner's (1957) theory of language acquisition, which held that children are 'blank slates' with regard to language, and attributed language development to reinforcement and conditioning, Chomsky (1957) argued that language is subserved by an innate, dedicated 'language faculty', which he termed the Language Acquisition Device (LAD). Chomsky (1957) held that the language to which children is exposed is 'degenerate' and full of stops and starts, and therefore only the existence of an innate device for language learning could account for the speed and relative ease with which children learn the language around them, from a very limited and grammatically incorrect sample of language and without formal teaching. Furthermore, he held that the 'language faculty' is distinct from general intelligence. The essay will begin by outlining the main tenets of Chomsky's theory of language acquisition. It will then examine evidence that supports Chomsky's theory and evidence that challenges it. In exploring the extent to which Chomsky's theory can account for language developmentse issues, the essay seeks to highlight a number of potential limitations to Furthermore, Principles and Parameters theory states that the properties (parameters) ...read more.

It is also believed that adults help children acquire language through routines known as 'formats' in which language is learned in context and by teaching children social conventions such as 'thank you'. Having considered the role of nurture in language acquisition, the essay now focuses on the nativist perspective. Clearly, language must have a biological basis. Firstly, language is species-specific, though some researchers clearly disagree. However, despite extensive attempts at teaching chimpanzees to use language via sign language, none has ever advanced beyond the rudimentary language skills of a two or three-year-old child. The human brain is specialised for language, for instance, it is known that Broca's area and Wernicke's area in the temporal lobe are the most relevant parts of the brain for language and language is lateralised in the left hemisphere in the vast majority of people. Nativist theorists hold that the amazing speed and relative ease with which children learn the grammatical rules of the language they hear around them, from a very limited and grammatically incorrect sample of language and without teaching, cannot be attributed to nurture (Chomsky, 2000). This is known as the 'poverty of the stimulus' hypothesis - which infers that the language to which children are exposed is poor and therefore cannot account for the acquisition of language. This, however, contradicts the 'motherese hypothesis', which holds that speech to children is in fact simpler and easy to understand. Though, clearly, adult-adult speech is likely to be marked by the flaws Chomsky points out. ...read more.

The evidence above would support the hypothesis that language learning becomes almost impossible after the 'critical period' (Lenneberg 1967). Importantly, it also lends support to the theory that language is truly innate, an ability distinct from general intelligence (Pinker 1994). While these cases support the theory that we are biologically 'pre-programmed' to acquire language, they also illustrate the necessity of input from the environment to allow our genetic endowment to properly develop. In conclusion, a significant body of empirical evidence into adult-child interaction and language stimulation indicates that the child's environment is fundamental in the development of language, though not in the way originally perceived by behaviourists and learning theorists. Similarly, there is strong evidence to indicate that humans may be predisposed to learn language: language is confined to humans, the brain is specialised for language, there are universal milestones in language acquisition, language seems to have universal properties and there seems to be a critical period for language development. In reality, neither nature nor nurture in isolation can explain the emergence of language and the two seem inextricably linked. Unlike the social interactionist approach, neither the traditional behaviourist approach nor the nativist approach acknowledges that the child in turn acts on his environment. It therefore seems that a combination of various aspects of nativism and various aspects of social interactionism would more adequately explain the relative contributions of nature and nurture in language development. ...read more.