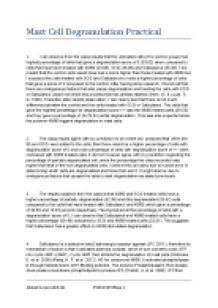 ﻿Mast Cell Degranulation Practical ________________ 1. I can observe from the class results that the untreated cells (The control group) had highest percentage of cells that gave a degranulation score of 0 (53.62) when compared to cells that have been treated with 48/80 (23.68), SCG (48.08) and Salbutamol (36.48). I did predict that the control cells would have had a score higher than those treated with 48/80 but I expected the cells treated with SCG and Salbutamol to have a higher percentage of cells that gave a score of 0 compared to the control. After having done research, I found out that there are endogenous factors that also cause degranulation and treating the cells with SCG or Salbutamol would not inhibit this process that has already started (Shen, W. ...read more.