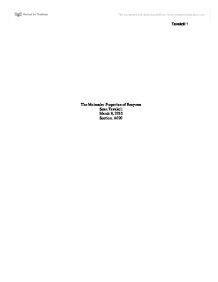 The Molecular Properties of Enzymes Sean Tavakoli March 8, 2010 Section: A020 Abstract: In this experiment, the effects of boiling and inhibitors on enzyme activity were studied. Methods used to carry out this study were the use of an indicator substance, methylene blue, and qualitative measurements of the changes in color that occur. Structurally similar substances were used as substrates and inhibitors in order to allow competitive inhibition to occur. A pH buffer was used in order to keep the pH constant for each sample observed. All of the test tubes were exposed to the same temperature so that all enzymes have the same rate of reaction, however for another set of experiments I changed the temperatures around to determine if heat had an effect on enzyme efficiency. The variables in this experiment were whether the enzyme was fresh or boiled and the presences of substrate and inhibitor. I hypothesized that the presence of an inhibitor hinders an enzymes ability to react with substrate. Also, that after boiling, an enzyme is unable to catalyze a reaction (Frankel 2009 et al pg 32 and 53) Introduction One of the most essential inferences to existence is credited to the rate and efficiency of chemical reactions that occur within an individual cell. In order for many of these reactions to be successful, they need a unique type of globular protein recognized as an enzyme. ...read more.

Hypothesis 3: Place a raw piece of heart meat the size of a corn kernel into a test tube labeled 3 for distinguishing purposes. The sample of raw meat should contain enzymes known as succinic dehydrogenase. Next, I added an assortment of substances to the test tubes in different portions. These included malonate, succinate acid, Phosphate buffer, water, and methylene blue. The malonic acid acted as a competitive inhibitor that is used to measure the effect on enzyme-substrate complex interactions. It is structurally alike to sucinnic acid and acts as an extra substrate in the reaction. The sucinnic acid was the substrate which was supposed to interact with the enzymes found in the meat. The phosphate buffer was added to the solution in order to maintain a pH of 7.4. This is so that the shifting pH could not be related to enzyme activity. Once all the components are mixed together, add three drops of methylene blue. The methylene blue can accept hydrogen atoms during the oxidation-reduction reaction and exhibit this absorption in the form of a color alteration. Once the methylene blue has been added, I used paraffin oil to prevent reoxidation from occurring. I then placed the tube in a water bath at 37�C for 30 minutes. After the time expired, I removed the test tube, mixed it around, and placed it back into the water bath for an additional 10 minutes. ...read more.

Both of these test tubes had the same amount of substrates, time of incubation, and other components, the only difference being that test tube 12 was placed in a warmer temperature environment to incubate. This goes hand in hand with my theory that most enzymes, to an extent, work more efficiently in warmer temperature environments than they do in colder ones. The possible sources of error in the lab could have been the amount of enzyme used. There was not an exact amount, because they teaching assistant simply said to grab a small pinch of the liver meat. This means that there could have been more enzymes than inhibitors in test tube 3. The reaction would still proceed if that was the case, but at a slower rate. To fix this possible source of error, a set mass of meat that would be weighed out with an accurate and precise scale could be added to each test tube, rather than just a visually similar amount. Acknowledgments: I would like to thank my teaching assistant, Dean Able, for helping explain to me each of the lab procedures. My lab partner, Scott Hoover, was also a great help to me. Together we were able to tackle the labs and understand very important enzyme concepts. Also if there was something I did not know and my teaching assistant was busy, Scott would help answer my problem. ...read more.