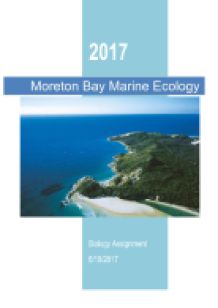 Transfer-Encoding: chunked ﻿________________ Contents Page Contents Introduction 2 Argument 1: Biotic Factors 3 Biodiversity 3 Indicator Species 5 Argument 2: Abiotic Factors 6 Sediment Life and Sediment Size 6 Water Temperature 8 Recommendation 9 Conclusion 10 Appendix 10 12 Bibliography 20 ________________ Introduction Moreton Bay Marine Park is made up of islands, open oceans and reefs covering more than 3400 km2, and is one of the least troubled coastal environments along the Queensland coast (About Moreton Bay, 2015). Over the past 150 years, Moreton Bay has been taken advantage of and has been used for sand mining, coral mining, whaling and fishing, and has become increasingly polluted from the coastal development of surrounding areas (Winton, Moreton Bay Marine Park, 2017). In 1993, the first Marine Park was opened in the area of Moreton Bay, which although was a big step towards the preservation of vulnerable marine species and their habitats, it left 99% of the bay open to fishing. In 2009, a new zoning plan was released for Moreton Bay, meaning that 16% of the bay is now a designated marine national park zone, and a further 8% has a conservation status for recreational and commercial activities (Marine Parks (Moreton Bay) Zoning Plan 2008, 2004). https://image.issuu.com/110518022348-415a513325c84d99b643ee4a562e246a/jpg/page_1.jpg Marine reserves are areas inside a marine park that exclude all extractive activities and are mainly managed for the conservation of their ecosystems, habitats and the marine life they support (Why marine reserves are important, 2015). In Australia, Marine reserves are multi-use areas and allow a wide range of activities according to different zones (Winton, Marine Parks, 2017). The benefits of Green Zones include; protecting spawning areas and nursery grounds, providing refuge for protected species, boost species numbers, increasing the abundance of fish, minimising damage to important habitats and building the resilience of the reef against certain threats such as water pollution or climate change (Zoning, Permits and Plans, 2016). ...read more.

This may affect the data reliability due to the environmental factors such as tide, time of day and weather, and factors such as how many fishing boats are nearby, and on the 15/5 multiple fishing boats were seen at Green Island. A final factor which may have caused a decrease in the amount of fish seen at either Green Island or Saint Helena Island is the location of the site around Green and Saint Helena Island, as disturbances from the main land such as fishing boats, pollution and recreational activities. On the other hand, abundance of species may be greater on the east side of either Island as there is less human impact to affect fish species. Indicator Species Indicator species are organisms that reflect a specific environmental condition or change in the environment through their presence, absence or abundance (Encyclopedia of Life). They can be used to signal any changes in the environment and may also be used to analyse the health of the Saint Helena Island and Green Island ecosystem, and therefore is useful in supporting the recommendation of extending the current Green Zone at the Moreton Bay Marine Park. To allow closer evaluation, the indicator species chosen is Snapper, and its abundance and average size at both Green Island and Saint Helena Island will be analysed to show the effect of indicator species on the fish stock population of Moreton Bay. Appendix 9 shows the N.Max of snapper in both GI and SH that were seen in the BRUV (baited remoted underwater video), and Appendix 10 shows the average size of the snapper across the sites seen in 2016, and it is clearly seen that in Saint Helena Island the average size of Snapper is larger than the average size of Snapper at Green Island. This may be due to the fact that fish such as the Snapper are affected by size-selective fishing methods, which have applied a ?culling? or ?cropping off? effect (The Effects on Fish stocks of Fishing/Overfishing and other human activities -- how do opposing theories compare to the "Starvation" theory? ...read more.