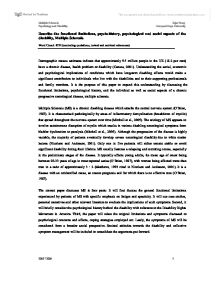 Describe the functional limitations, psychohistory, psychological and social aspects of the disability, Multiple Sclerosis. Word Count: 4291 (excluding quotations, in-text and end-text references) Demographic census estimates indicate that approximately 9.5 million people in the UK (18.2 per cent) have a chronic disease, health problem or disability (Census, 2001). Understanding the social, economic and psychological implications of conditions which have long-term disabling effects would make a significant contribution to individuals who live with the disabilities and to their supporting professionals and family members. It is the purpose of this paper to expand this understanding by discussing the functional limitations, psychological history, and the individual as well as social aspects of a chronic progressive neurological disease, multiple sclerosis. Multiple Sclerosis (MS) is a chronic disabling disease which attacks the central nervous system (O'Brien, 1987). It is characterised pathologically by areas of inflammatory demyelination (breakdown of myelin) that spread throughout the nervous system over time (Mitchell et al., 2005). The etiology of MS appears to involve autoimmune disruption of myelin which results in various disabling neurological symptoms from bladder dysfunction to paralysis (Mitchell et al., 2005). Although the progression of the disease is highly variable, the majority of patients eventually develop severe neurological disability due to white matter lesions (Nicolson and Anderson, 2001). Only one in five patients will either remain stable or avoid significant disability during their lifetime. MS usually features a relapsing and remitting course, especially in the preliminary stages of the disease. It typically affects young adults, the mean age of onset being between 29-33 years of age in most reported series (O'Brien, 1987), with women being affected more than men in a ratio of approximately 3 : 2 (Matthews, 1993 cited in Nicolson and Anderson, 2001). It is a disease with an unidentified cause, an unsure prognosis and for which there is no effective cure (O'Brien, 1987). The current paper discusses MS in four parts: It will first discuss the general functional limitations experienced by patients of MS with specific emphasis on fatigue and spasticity. ...read more.

Studies show that disability advocates challenged public perceptions and raised consciousness about social justice and living conditions for the millions of people who live with disabilities (e.g. Shapiro, 1993; Block, 1997). The DRM features a rich and varied history of emancipation by individuals claiming rights and demonstrating actions that should have earned a more pivotal role in western history (Ware, 2001). Because the role of the DRM has been neglected from common understanding, its reintroduction into the collective consciousness will prove to be a long and arduous process. Having considered the social backdrop that MS has evolved in, the following sections will present psychological issues surrounding MS and then focus on specific psychological impacts of spasticity and fatigue, followed by a collective look at societal reactions and attitudes towards MS and its patients. Psychological Issues and Adjustment to MS The debilitating nature of the disorder and its unpredictable natural development causes uncertainty about the future health and well-being of MS patients. Thus, it is not surprising for MS related symptoms to lead to negative emotional responding. The degree to which this occurs may be partly dependent on the way in which people cope with MS and the dynamic symptomatology related to the disability (McCabe, McKern, and McDonald, 2004). MS patients are required to cope with deteriorating health, changing social and close relationships, and an increased need for support (McCabe et al. 2004). Their well being is largely dependent on how they adjust to such changing circumstances. It is also conceivably difficult for the individual to cope with events and changes which are beyond his/her control thereby leading to negative reactions, helplessness and cause depression (Feinstein and Feinstein, 2001). MS patients have a significantly increased rate of depression compared to the general population. Studies have shown point and lifetime prevalence rates of major depression to be 15 and 50% respectively (Minden and Schiffer, 1990). An evaluation of all these variables and their inter relationships is needed to provide an assessment of why different people with ...read more.

Therefore, because disability is regarded as negative and associated with incapability, all of the above factors may collectively contribute to the various limitations on patients' daily activities. Conclusion This paper has discussed 4 major aspects of MS and its patients: The incidence and prevalence of MS along with its functional limitations were presented - with special reference to spasticity and fatigue as major debilitating symptoms of MS, the psychosocial history behind MS was briefly mentioned to present a backdrop to MS and its psychosocial evolution which then led to major psychological aspects of MS and its related symptoms, concluding with state and societal attitudes towards MS and other disabilities. MS is a serious disease for which there is still no cure. However, from the above discussion it is evident that many aspects of successful living with MS fall outside the traditional medical model. Healthcare interventions which focus on improving symptoms and their management through the use of adjustment behaviours may have a more effective impact on the well-being of patients with MS (Wassem and Dudley, 2003). The treatment of physical, psychological and social needs of patients improves well being among patients, particularly where the intervention is sustained or incremental. Even simple interventions such as providing adequate disease related information or support are likely to have a positive affect. There are current reports of unmet needs in service provision of 36% in the UK (Kersten et al., 2000 cited in Mitchell et al. 2005). 75% of patients reported inadequacies in information they were offered about MS (Somerset, Campbell, Sharp, Peters, 2001 cited in Mitchell et al. 2005). As discussed above, the management of MS has predominantly been about limiting disability by symptomatic management of relapses and attempting to influence long term course. Although this is essential, the above paper suggests that it be accompanied by improving participation, wellbeing and overall quality of life. By improving this strategy, patients are presented with various options even if disease modifying treatments are unavailable or ineffective (Mitchell et al., 2005) and experience can suggest how to develop broad interventions with beneficial psychological and physical effects. ...read more.