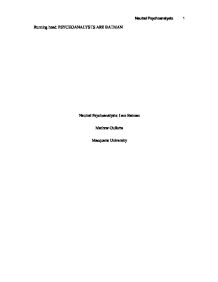 Running head: PSYCHOANALYSTS ARE BATMAN Neutral Psychoanalysts: I am Batman Mathew Gullotta Macquarie University Neutral Psychoanalysts: I am Batman Batman. When read, the image of a superhero with a profound power devoted to helping others comes to mind. Defined by the Complete Scoundrel sourcebook (McArtor & Schneider, 2007) as a "neutral good" character, Batman adheres to a personal code, in which he is unbiased in doing 'good', while remaining unindebted to those he helps. This personal code was devised to maintain a greater good in society by providing a set of guiding principles that aid in making moral decisions and is followed when fighting crime. Psychoanalysts draw many parallels with Batman. Psychoanalysts are also devoted to helping others and follow a set of principles when in practice. An essential part of the psychoanalytic code is neutrality. According to Meissner (1998) "neutrality has been long honored as an essential component of the [psycho]analytic situation and process" (p. 1089). The concept of neutrality has recently been the basis of highly controversial debate. Emphasis has been placed on the interactions of the analyst, in particular the use of self-disclosures. Analysts have examined the outcomes of neutrality and self-disclosure in the analytical process. These authors have purported mixed stances. Some analysts have advocated neutrality (e.g., Freud, 1912, as cited in Schatcher & K�chele, 2007; McIlwain, 2007). ...read more.

On the other hand, the analyst can participate more in the analytic process by self-disclosing. Schachter and K�chele (2007) argued that interactions, such as self-disclosure, are two-fold. Firstly, the patient participates less and important areas of the account may be obscured. Secondly, without open expression and interaction from the analyst, the patient may feel inhibited to further explore personal affects. Schachter and K�chele proposed that self-disclosure by the analyst can encourage the patient in ancillary examination. However, this prompting may be problematic. The patient may be more likely conform to, rather than challenge, the ideas of the analyst and consequently providing a false account (Shill, 2004). Analytical neutrality can overcome this fault. As a result of maximum concentration, the analyst can easily identify the areas that require attention when conducting the analysis. The analyst can probe these areas by asking carefully devised questions in order to open dialogue allowing for greater self-examination by the patient. In light of this solution, analytic neutrality is advantageous to self-disclosure techniques as neutrality can "empower [the patient], rather than encourag[e] a dependency on analyst as problem solver" (McIlwain, 2007). Likewise, the code of Batman not only maximizes his autonomy in fighting crime, it also provides a medium in which he can control and channel his attention towards doing 'good'. ...read more.

This can be juxtaposed to the subjective intrusions that occur with self-disclosing techniques. Not only do self-disclosing techniques interfere with how the patient is examined, they can also result in the denial of appropriate interventions (Shill, 2004). The inevitable expectations that psychoanalysts usually have for their patients may have a significant influence on intervention. However, the use of neutrality may be essential when devising appropriate interventions for the patient. Another criticism is that the analytical neutrality tends to disengage the patient from the analyst (Meissner, 1998). Some critics suggest that although neutrality remains equidistant from the requirements of the drives, ego, and superego, it does not preclude the existence of the intent of the therapy (Greenberg, 1986). Alternatively, proponents of neutrality assert that although neutrality may be passive in nature, there is still involvement between patient and analyst (Mills, 2007). One can suggest that as the participant-observer relationship exists, in the essence that the analyst inevitably interacts with the patient, neutrality precludes disengagement the patient. In conclusion, the patient's autonomy, guidance towards the analytic process, and the influence on interventions are aspects of the analytic process in which neutrality is advantageous to self-disclosing techniques. Through thorough evaluation it is evident that, similarly to Batman's personal code which acts as a guiding force in his assignment to fighting crime, neutrality functions to guide the analysts in the analytic process. With adherence to a code which is intended to non-pejoratively help others, one can conclude that psychoanalysts are Batman. ...read more.