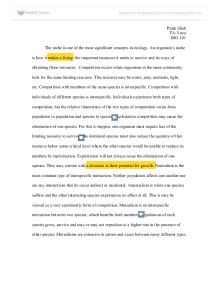 Palak Shah TA: Luca BIO 101 The niche is one of the most significant concepts in ecology. An organism's niche is how it makes a living: the important resources it needs to survive and its ways of obtaining those resources. Competition occurs when organisms in the same community look for the same limiting resource. This resource may be water, prey, nutrients, light, etc. Competition with members of the same species is intraspecific. Competition with individuals of different species is interspecific. Individuals experience both types of competition, but the relative importance of the two types of competition varies from population to population and species to species. Exploitation competition may cause the elimination of one species. For this to happen, one organism must require less of the limiting resource to survive. The dominant species must also reduce the quantity of that resource below some critical level where the other species would be unable to replace its numbers by reproduction. Exploitation will not always cause the elimination of one species. They may coexist with a decrease in their potential for growth. ...read more.

Some algae also have a necessity of other nutrients, such as B vitamins. The two algae in our experiment include Closterium and Microsterium. Closterium is a large desmid. They are green algae vaguely related to vascular plants. They are autotrophs that can obtain energy and carbon from inorganic sources in their environment. In this lab, we first obtained a stock culture of each species and observed each of them. We drew five small circles on a plastic Petri dish and numbered each circle. Then we placed a sample of species one culture inside each side. We did the same procedure for the second Petri dish, but with samples of species two culture. In the center of one dish we placed a drop from our species one culture, then added a drop of our species two species two culture. We estimated the density of each species. For each sample we counted the number of individuals that we saw and for each species we found the average number per sample. We divided the number by the size of our sample, which is what density was. ...read more.

At high levels of nutrient availability, competition is mainly for light. As light is a unidirectional resource, high nutrient habitats are dominated by fast-growing perennials with a tall stature and a rather uniform vertical distribution of leaf area. Moreover, these species have high turnover rates of leaves and roots and a high morphological plasticity during the differentiation of leaves. There are fewer consensuses, however, about the importance and intensity of interspecific competition in nutrient-poor environments. It is argued that selection in nutrient-poor habitats is not necessarily on a high competitive ability for nutrients and a high growth rate, but rather on traits which reduce nutrient losses. Due to evolutionary trade-offs plants can not maximize both growth rate and nutrient retention. Therefore, the low growth rate of species from nutrient-poor habitats should be considered as the consequence of nutrient retention rather than as a feature on which direct selection takes place. The complementary traits of species from nutrient-poor and nutrient-rich habitats mutually exclude them from each others' habitats. Moreover, these traits have severe consequences for waste decomposability and thereby also for nutrient cycling. This leads both in nutrient-poor and nutrient-rich habitats to a positive feedback between plant species dominance and nutrient availability, thereby promoting ecosystem stability. ...read more.

This is an acceptable piece of work, but several small flaws prevent it from being really good. Firstly, it has not been proof read, and therefore suffers from silly errors and an inappropriately chatty tone. Secondly, it lacks a clear structure, particularly in the first outlining of the area. Thirdly, it would be vastly improved by the use of diagrams. Niches are the perfect topic in which to use simple Venn diagrams to clarify that one species might rely more heavily on a nutrient than another, or be better equipped to exploit it. Finally, the analysis of the experimental work done is extremely brief and shallow. It could be much longer and more detailed. At my (Russell group) university this piece of work would receive 3 stars.