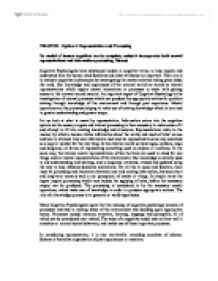 No model of human cognition can be complete, unless it incorporates both mental representations and information processing. Discuss

TMA07/08 - Option 3: Representation and Processing No model of human cognition can be complete, unless it incorporates both mental representations and information processing. Discuss Cognitive Psychologists have developed models in cognitive terms, to help explain and understand how the human mind functions and what attributes are important. Their aim is to evaluate cognitive architectures by investigating the mental activities taking place inside the mind. Our knowledge and experiences of the external world are stored as internal representations which require mental interactions or processes to assist with gaining access to the relevant stored material. An important aspect of Cognitive Psychology is the investigation of internal processes which can produce the appropriate actions for problem solving through knowledge of the environment and through past experience. Mental operations are the processes helping to make use of existing knowledge which in turn lead to greater understanding and greater scope. Let us look at what is meant by representation. Information enters into the cognitive system via the sensory organs and internal processing is then necessary to make sense of it and attempt to fit into existing knowledge and structures. Representations relate to the manner by which a human retains information about the world, and much of what we see and hear is retained. Any new information must also be represented in some way and stand as a copy or symbol for the real thing. In the external world we have signs, symbols, maps and diagrams, all forms of representing something such as objects or locations. In the same way, the internal mental representations within the brain are used to stand for real things and are mental representations of the environment. ...read more.

Models therefore have to allow for individual differences between problem solvers. Simon (1974) also considers the role of memory, including capacity of working memory and time differences between storage and retrieval. Retrieval from memory is triggered by differing means but involves the accessibility of information. Categorization of objects can allow objects to be represented in many different ways. Our knowledge helps us to make classifications based on certain attributes. The categorization allows things such as objects and animals to be represented in memory in varying forms, which are designed to aid recall and understanding. Therefore an object or animal is recognised from previously stored details, which include concepts and categories at varying levels or hierarchies, all linked back in some way to the original. Collins and Quillian (1969) proposed that people's internal, mentally stored representations take the form of hierarchy. Broad categories as nodes being at the top and broken down into more specific categories as the branches descend. Each level links back and each contains defining properties. This model helps identify that processing is required to help establish links and for example distinguish between a canary and an ostrich. Without information processing of objects and attributes together with the associated mental representations the retrieved information would be limited, and less effective. Understanding the context in which things are presented to us, is an aspect which links mental representations and processing. Our capacity to see and recognize objects is important but without information processing the context and meaning could be lost in translation and the nature of the task wrongly interpreted. The distinction between episodic and semantic memory knowledge has a bearing on retrieval methods and successes. ...read more.