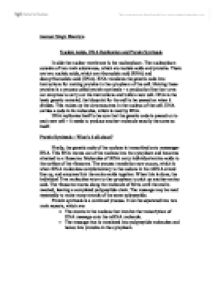 Jasmeet Singh Bhambra Nucleic Acids, DNA Replication and Protein Synthesis In side the nuclear membrane is the nucleoplasm. The nucleoplasm consists of two main substances, which are nucleic acids and proteins. There are two nucleic acids, which are ribonucleic acid (RNA) and deoxyribonucleic acid (DNA). RNA translates the genetic code into instructions for making proteins in the cytoplasm of the cell. Making these proteins is a process called protein synthesis - a production line that turns out enzymes to carry out the instructions and build a new cell. DNA is the basic genetic material, the blueprint for the cell to be passed on when it divides. This makes up the chromosomes in the nucleus of the cell. DNA carries a code in its molecules, which is read by RNA. DNA replicates itself to be sure that the genetic code is passed on to each new cell - it needs to produce another molecule exactly the same as itself. Protein Synthesis - What's it all about? ...read more.

They are made up of many similar, smaller molecules joined into a long chain that makes them polymers. Nucleotides are smaller molecules from which DNA and RNA are made up. Therefore DNA and RNA are polynucleotides, and are just referred to as nucleic acids. Each nucleotide has three parts - a five-carbon or pentose sugar, a nitrogen-containing base and a phosphate group. The pentose sugars The sugar is one of the very two similar pentose rings. Ribonucleic acids contain the sugar ribose. Deoxyribonucleic acids contain the sugar deoxyribose. The only difference between these sugars is tat deoxyribose contains one oxygen atom less than ribose. Transfer RNA (tRNA) This is found in the cytoplasm. Its function is to pick up particular amino acids, which are always free and carries them to the ribosome where they are all joined to form a protein. Each amino acid has its own specific tRNA molecule. It is involved in the process of protein synthesis. Messenger RNA (mRNA) This is formed in the nucleus in a similar way to the replication of DNA. ...read more.

This takes place under the control of a specific enzyme and with energy from ATP. Also in the cytoplasm, the Mrna molecule attaches to a ribosome. Ribosomes consist of ribosomal RNA and protein and contain a small and large subunit. These two subunits combine to form polysome. The Mrna binds to the small subunit. AUG is always the first three exposed bases, or codon. A Trna molecule with the complementary anticodon, UAC, forms hydrogen bonds are formed with this codon. This molecule has the amino acid methionine attached to it. With the next three exposed bases, a second Trna molecule bonds with them. This brings another amino acid. The two amino acids are held together closely which forms a peptide bond between them. The reaction is catalysed by an enzyme, which is found in the small subunit of the ribosome. The ribosome moves along the Mrna, 'reading' the next three bases on the ribosome. A third Trna molecule brings a third amino acid, which joins to the second one. The first Trna then leaves. The polypeptide chain continues to extend, until a 'stop' codon is exposed on the ribosome, which is UAA, UAC or UGA. ...read more.