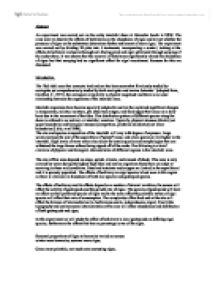 Observe the effects of herbivores on the abundance of algae and to test whether the presence of algae on the substratum determines further settlement of more algae.

Abstract An experiment was carried out on the rocky intertidal shore at Maroubra beach in NSW. The aims were to observe the effects of herbivores on the abundance of algae and to test whether the presence of algae on the substratum determines further settlement of more algae. The experiment was carried out by dividing 20 plots into 5 treatments, incorporating a control, looking at the effects oh herbivore exclusion through anti-fouling paint and algal settlement through scraping of the rocky shore. It was shown that the removal of herbivores significantly altered the abundance of algae but that scraping had no significant effect for algal recruitment. Reasons for this are discussed. Introduction. The 'Sub tidal zone that connects land and sea has been somewhat frivolously studied by ecologists yet comprehensively studied by both zoologists and marine botanists' (adapted from; Carefoot, T., 1977), the ecological complexity is of great magnitude and there is an acute relationship between the organisms of the intertidal zone. Intertidal organisms have become specially adapted to survive the rapid and significant changes in temperature, salinity, moisture, pH, dissolved oxygen, and food supply that occur on a daily basis due to the movement of the tides. This distribution pattern of different species along the shore is referred to as vertical, or intertidal, zonation. Typically, physical stresses (abiotic) set upper boundaries and biological stresses (competition, predation etc.(biotic)) ...read more.

If not than our results are not representative. Was the wave action and weather conditions representative? Physical factor also play a large role in the presence of any intertidal organisms (Creese, 1988). The surfing lull over the winter 04' has been described by some as 'uncanny' it is the wave action that acts as transport for new algal 'colonists' thus, if there is no waves there is no colonists. This effects recruitment of algae. Seasonal effect and proportion of algae growth. This experiment may in fact have been conducted at a time that is non representative of the community's natural state for reasons in species life cycles and seasonal proportion (adapted from; Williams,G.A.et al ). Human error can also be mentioned as a possible reason to the lack of statistical significance in the results, eg; was scraped areas scraped correctly? Were data figures counted correctly? Were species identified correctly? Was randomly selected areas random? Maybe herbivory is not from Gastropods? We have not included the herbivory from crabs this is a somewhat substantial proportion I would have thought, thus we may be attributing consumption to the wrong species. The results of this experiment show that herbivorous grazing limpets have a significant effect on the growth of green algae on a rocky shore in the mid-high region. Limpets dominate over other forms of gastropods due to their more prostrate morphology, resisting wave action and desiccation. Removing algae from the stratum prior to sampling showed very little effect on algal growth, and the paint used to mark out plot boundaries showed none. ...read more.