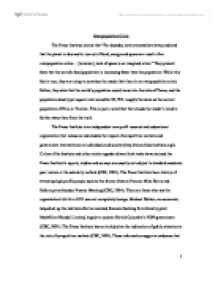 Overpopulation Crisis The Fraser Institute claims that "For decades, environmentalists have predicted that the planet is doomed to run out of food, energy and space as a result of an overpopulation crisis... [however], lack of space is an imagined crisis." They present facts that the world's food population is increasing faster than the population. While this fact is true, they are trying to convince the reader that there is no overpopulation crisis. Rather, they state that the world's population could move into the state of Texas, and the population density per square mile would be 20, 705, roughly the same as the current population of Paris or Toronto. This is just a novel fact that clouds the reader's mind to further sway them from the truth. The Fraser Institute is an independent non-profit research and educational organization that measures and studies the impact of competitive markets and government interventions on individuals and society (http://www.fraserinstitute.org/). ...read more.

in atmospheric composition, increase levels of pollution, high epidemics and pandemics, low life expectancy, unhygienic living conditions, and increase levels of welfare, all contributing to elevate crime rates (Leakey, 1996). A number of scientists warn that climate change and an increasing population could trigger a global food crisis in the next half century as countries struggle for fertile land to grow crops and rear animals (Sample, 2007). The overpopulation of the continent is attributed to the natural growth in population and rural-urban migration, thus resulting to the break-down of traditional norms of sexuality, spread of disease, massive unemployment, corruption, pollution, poverty, lack of education and high child mortality (Lovett, 2008). These are all issues the Fraser Institute neglects to discuss. They point to the fact that there is enough wide open space available to hold numerous multiples of the present population. What they don't realize is that most of the open space that they are referring to is inhabitable. ...read more.