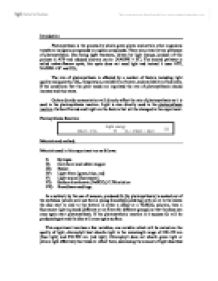 Furthermore some of the oxygen produced would have dissolved into the medium the disc was suspended in. Another more unlikely, yet possible error source would be the microscopic animals living on the disc might have used some [very very very minute] oxygen. The light source itself could be regarded as a source of error! The source itself wasn't the only source in the room, the rooms fluorescent lighting was surely getting to the discs while quantities of photons from other groups would also have reached the discs. Other sources of error would involve the lab partners themselves; while creating the vacuum the index finger may have not fully sealed the chamber thus reaching only partial vacuum; hence not a complete extraction of oxygen present in the discs. In a nutshell, this experiment proves the equation [1] that both CO2 and light energy both affect the rate of photosynthesis: In this specific experiment the leaf discs that undergo photosynthesis are the one under the red or no filter with NaHCO3. ...read more.