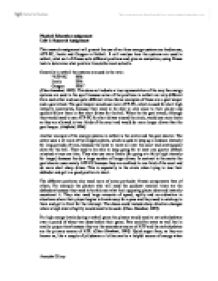 Physical Education assignment Unit 2: Research Assignment This research assignment will present the use of are three energy systems our bodies use, ATP-PC, Lactic and Oxygen in Netball. It will analyse how the systems are used in netball, what sort of fitness suits different positions and give an evaluation, using fitness tests to determine what position I would be most suited to. Generally in netball the systems are used in the ratio: "ATP-PC 30% Lactic 20% Oxygen 50%" (Class handout, 2005). This does not indicate a true representation of the way the energy systems are used in the sport because some of the positions in netball are very different from each other and use quite different ratios. Some examples of these are a goal keeper and a goal attack. The goal keeper would use more ATP-PC, which is used for short high intensity movements, because they need to be able to stay close to their player and quickly follow them in fast short drives for the ball. ...read more.

They also use more Lactic (for going at a fairly high intensity for longer) because the do a large number of longer drives. In contrast to the centre the goal shooter uses mainly ATP-PC because they are confined to one third of the court and do more short sharp drives. This is especially in the circle when trying to lose their defender and get in a good position to shoot. The different positions also need more of some particular fitness components than of others. For example the players who will need the quickest reaction times are the defenders because they need to be able see what their opposing player does and instantly counteract it. They also need large amounts of speed, agility and co-ordination in situations where their player begins to break away for a pass and they need to catch up to them and get in front for the intercept. ...read more.

Various fitness tests combined with height suggest the position of either wing attack or goal attack is best suited to my fitness. These attacking positions all need to have players with a good endurance level, high agility and need to be fairly fast. The goal attack also needs experience and accuracy to shoot. Endurance to carry out the roles effectively also suggests I could play centre. This assignment has used knowledge of energy systems, their fuel supplies and fitness components to discover the ways they are linked with netball. It has discussed ways of improving performance through foods and training and has used this information to figure out what positions a player should play from the abilities they have. Appendix 1: In each fitness test I scored as follows: Vertical Jump 33cm Average Agility 17.32secs Good Speed 1.99secs Good Beep/endurance 6.7 Good. ...read more.