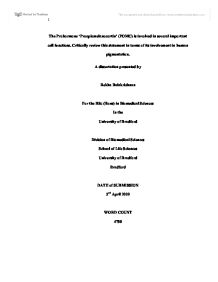 The Prohormone 'Proopiomelanocortin' (POMC) is involved in several important cell functions. Critically review this statement in terms of its involvement in human pigmentation. A dissertation presented by Rekha Balakrishnan For the BSc (Hons) in Biomedical Sciences In the University of Bradford Division of Biomedical Sciences School of Life Sciences University of Bradford Bradford DATE of SUBMISSION 3rd April 2009 WORD COUNT 4788 TABLE OF CONTENTS Abstract 3 Introduction 4 Cell Functions of POMC 8 POMC Derived Peptides 12 The Importance of POMC- derived Peptide............................................... 15 POMC and Pigmentation 17 POMC and Pathology 20 Conclusion 22 Bibliography 25 Abstract This work reviews several important cellular-based functions of proopiomelanocortin (POMC), with emphasis on human skin pigmentation. As melanocortin peptides, PMOC regulates several physiological functions, including skin pigmentation, adrenal and cardiovascular functions, inflammation, energy homeostasis, and exocrine secretion. It also produces an array of biologically active peptides, by means of an extensive, tissue-specific posttranslational process. The skin is a target organ for the actions of POMC and its derived neuropeptides, including ?-melanocyte stimulating hormone (?-MCH), �-endorphin, and ACTH. This study also surveys diseases associated with POMC gene mutations. These defects lead to complex medical ailments, including deficiency in corticotropin, severe, early-onset obesity, and hypopigmentation. In the same vein, POMC and its derived neuropeptides are necessary components of several nervous system and body tissue processes. [A1] The site of production and manner of delivery determine the way, in which POMC derived peptides act. These peptides behave as cytokines, growth factors, neurotransmitters and hormones. In the cutaneous cells, POMC peptides affect melanin pigmentation, immune activity and migratory capabilities Consequently, it has been conjectured that the skin POMC system plays a significant role in preserving the integrity of the skin, thereby reducing disturbances to internal metabolic equilibrium. Introduction The POMC gene engenders the encoding of a polypeptide hormone precursor. The latter utilises prohormone convertases, in order to exhibit widespread post translational processing. ...read more.

Previously, the most well-known role of these peptides had related to the regulating of adrenal steroidogenesis that is controlled by ACTH of corticotroph origin and pigmentation of the skin by ?-MSH. Subsequent research has shown that peptides derived from the POMC, which are synthesised in the neurons of the hypothalamus, are crucial in energy homeostasis control (Coll, Farooqi, Challis, Yeo, & O'Rahilly, 2004, P 2557-2562). Thus, Coll et al. have stated that POMC peptides are indispensable in controlling metabolic equilibrium. In a 2008 article, Clement et al. described the five peptides derived from POMC; of these, the two most important are ACTH (produced in the anterior pituitary gland) and ?-MSH (produced in the hypothalamus). The study also discovered that POMC gene nullification creates a pleiotropic syndrome that changes pigmentation of the hair and skin, and promotes severe obesity and secondary hypocortisolism. They even recommend that patients suffering from a combination obesity/early-onset adrenal insufficiency should be tested for POMC abnormalities, even if the skin and hair pigmentation depict no abnormalities (Clement, et al., December 2008). Creemers et al. suggested that these mutations impair POMC's ability to generate bioactive products. Specifically, mutations affect the trafficking pathway because the compound mutates in its N-terminal sequence (Creemers, et al., Nov 2008, Pp 4494-4499). As such, Valverde et al. emphasised the direct association between the MC 1R gene derivatives, red hair, and reduced skin-tanning ability (Valverde, Healy, Jackson, Rees, & Thody, 1995). Furthermore, the MCI receptor has been shown to be responsible for melanoma, basal cell carcinoma, and squamous cell carcinoma diseases. In, Suzuki et al., have stated that the Agouti Signalling Protein or ASIP inhibits the combination process of a-MSH and MC1 receptor. This results in the inhibition of melanogenesis [A6](Suzuki, Tada, Ollmann, Barsh, Im, & Lamoreux, 1997). It was established that the process of polymorphism in the ASIP gene at position 8818 is directly associated with human pigmentation and that it produces dark hair and brown eyes among humans (Kanetsky, Swoyer, Panossian, Holmes, Guerry, & Rebbeck, 2002). ...read more.

The POMC peptides derived from keratinocytes are very effective in causing melanogenesis in human melanocytes. The MC1R is significant in regulating cutaneous pigmentation. In addition, melanocyte function is controlled by the activation of the melanocortin receptor, and the relevant agonist is the ?-MSH. A very important source of the ?-MSH is the human skin. Thus, the chief controller of human skin pigmentation is the ?-MSH that had been produced locally. Moreover, the ?-MSH behaves like an autocrine or paracrine mediator of pigmentation that has been induced by UVR (Tsatmali, Ancans, Yukitake, & Thody, 2000). POMC peptides obtained from keratinocytes are effectual in engendering melanogenesis in human melanocytes. Pigmentation of the skin is controlled to a great extent by the MC1R. Moreover, locally produced ?-MSH has been deemed to be the cardinal controller of the cutaneous pigmentation in humans. The cutaneous profiling of POMC peptides and its determination by proteolytic processing of POMC are of great significance in melanocortin signalling. In addition, they constitute major controlling factors that govern pigmentation of the skin. Consequently, the manner in which cutaneous processing of the POMC transpires is of great significance in regulation of pigmentation. ?-MSH and ACTH peptides constitute the principal moderators of skin pigmentation in humans. These POMC derived peptides actively participate in the controlling of melanogenesis in the human epidermis, dendricity, and proliferation by means of action that transpires at the melanocortin 1 receptor. Subsequent to the observation and analysis of inactivating mutations of the POMC gene in humans, it was surmised that the POMC peptides were central to the control of pigmentation in human hair. As such, null mutation of the POMC in humans produces sallow skin and the red hair phenotype. It is believed that these results indicate the absence of ligands for melanocortin 1 receptor. Analogously, fair skin and red hair have been correlated to polymorphisms of the melanocortin 1 receptor that diminish MC1R activity. Therefore, it can be concluded that the POMC-derived peptides regulate several physiological functions, including skin pigmentation, inflammation, energy homeostasis, and exocrine secretion. ...read more.