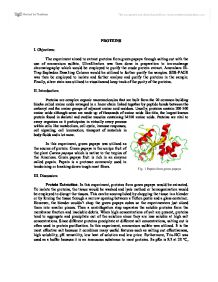 Proteins. The experiment aimed to extract proteins from green papaya through salting out with the use of ammonium sulfate. Ultrafiltration was then done in preparation to ion-exchange chromatography which would be employed to purify the crude protein extr

PROTEINS I. Objectives: The experiment aimed to extract proteins from green papaya through salting out with the use of ammonium sulfate. Ultrafiltration was then done in preparation to ion-exchange chromatography which would be employed to purify the crude protein extract. Amersham Hi-Trap Sephadex Desalting Column would be utilized to further purify the samples. SDS-PAGE was then be employed to isolate and further analyze and purify the proteins in the sample. Finally, silver stain was utilized to visualizeand keep track of the purity of the proteins. II. Introduction: Proteins are complex organic macromolecules that are built from the 20 common building blocks called amino acids arranged in a linear chain linked together by peptide bonds between the carboxyl and the amino groups of adjacent amino acid residues. Usually, proteins contain 200-300 amino acids although some are made up of thousands of amino acids like titin, the largest known protein found in skeletal and cardiac muscles containing 34350 amino acids. Proteins are vital to every organism as it participates in virtually every process within cells like metabolism, cell cycle, immune responses, cell signaling, cell locomotion, transport of materials in body fluids and a lot more. In this experiment, green papaya was utilized as the source of protein. ...read more.

Addition of Gel Loading Buffer-Dithiothreitol Mixture to the Sample. Before running the samples into the setup, GLB-DTT mixture was added to the sample. The gel loading buffer is made up of Tris-HCl, SDS, bromophenol blue and glycerol. To resolve protein mixtures and isolate and separate the proteins effectively, they were denatured with the SDS in GLB so that the proteins wouldn't have any secondary, tertiary or quaternary structure. SDS makes the multimeric proteins to dissociate into their subunits, and all polypeptide chains are forced into extended conformations with similar charge:mass ratios. SDS treatment obliterates the effects of the disparities in shape so that chain length, which reflects mass, is the sole determinant of the migration rate of proteins in SDS-PAGE. Since each protein has an isoelectric point and molecular weight specific to its primary structure, different proteins with the same molecular weights would migrate differently if SDS wasn't added due to the differences in mass:charge ratios. The protein mixture was also heated in a water bath at 100oC. Boiling the protein mixture in the presence of SDS enables it to wrap around the polypeptide backbone. SDS binds to proteins in a constant weight ratio of 1.4 g SDS per 1.0 g protein providing a uniform mass:charge ratio for most proteins. ...read more.

However, the remaining samples didn't have any band. So only the crude extract can be compared to the standard for the weights of the proteins present.In theory it is possible to quantitatively determine the actual molecular weight of the proteins in kDa. This can be done by plotting the distance travelled of the band from the well against the molecular weights of specific bands specified by the company. Since the crude extract has 4 bands from the lowermost part of the gel, it can be concluded that the extract has proteins weighing 10, 15, 25, and 35 kDa. This further proves that one of the proteins isolated from green papaya is papain which weighs 38.9 kDa. Since the purified samples didn't show any clear band, it can be assumed that the ion-exchange chromatography wasn't accurately and precisely done. V. Conclusion: Based on the diagrams of the chromatogram and the SDS-PAGE gel used, it can be concluded that proteins were successfully isolated and extracted from green papaya. The SDS-PAGE gel shows that the crude extract contains proteins that weigh 10, 15, 25, and 35 kDa as compared to the standard. This proves that papain, which is predominant in green papaya, was successfully extracted as it weighs 38.9 kDa based on literature values. However, the other samples didn't show any clear band signifying that the ion-exchange chromatography wasn't employed accurately and precisely. VI. ...read more.