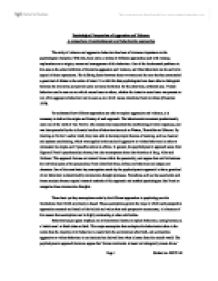 Psychological Perspectives of Aggression and Violence: A comparison of psychodynamic and behaviouris

Psychological Perspectives of Aggression and Violence: A comparison of psychodynamic and behaviourist approaches The study of violence and aggressive behaviour has been of immense importance to the psychological discipline. With this, have come a variety of different approaches each with varying explanations as to origins, causes and management of this behaviour. One of the fundamental problems in this area is the actual definition of the terms aggression and violence, and what behaviour can be said to be typical of these expressions. The differing factor between these two terms and the one that has commanded a great deal of debate is the notion of intent. It is with this that psychologists have been able to distinguish between the two terms and provide some universal definition for this otherwise, awkward area. Violent behaviour can be seen as one which causes harm to others, whether the intent to cause harm was present or not, while aggressive behaviour can be seen as one which causes intentional harm to others (Glassman 1979). To understand how different approaches are able to explain aggression and violence, it is necessary to look at the origins and history of each approach. The behaviourist movement predominately came out of the work of Ivan Pavlov, who extensively researched the conditioning of reflex responses, and was later preceded by the influential studies of behaviourists such as Watson, Thorndike and Skinner. ...read more.

This is usually explained by the resultant outcome of aggressive behaviour. When one person is aggressive towards another, behaviourists argue that it is because a favourable outcome can be reached by the aggressor; for instance, winning an argument or obtaining an item they wish to possess. This favourable outcome is the positive reinforcer, encouraging the display of aggressive behaviour. As the favourable outcome is likely to be the most immediate response to the behaviour, any reprimand or punishment is not regarded as highly. The resulting consequence is that the aggressor learns to use this behaviour in order to achieve such favourable outcomes in the future. Behaviourists use this theory to explain a great deal of anti-social behaviour, with the positive reinforcer being the key to the reoccurring behaviour. 'Aggression, like all other behaviour, is purely learnt on the basis of seeking one's optimal advantage' (Fromm 1974) As this has been described as a form of learnt behaviour, the behaviourist approach also offers ways in which aggression of this form can be controlled and prevented. They argue that it is necessary to change the situation so that the behaviour is no longer rewarded but in fact punished to a much greater degree. This is obviously very problematic, as it is difficult to remove the benefit of the primary reinforcer, and as can be seen in today's society, the judicial system does punish serious offenders but not to a degree where this behaviour is fully extinguished. ...read more.

Due to their stance on innate or learnt behaviour acquisition, their relative assumptions, theories and concepts have all been in direct opposition to one another. The psychodynamic approach argues that behaviour is innate and thus biologically determined. Due to this, their theories emphasise a hereditary normality that is intrinsic to all, this has repercussions on views to controlling aggression. Since this behaviour is instinctive, it cannot be resolved but merely exercised in 'safe', socially acceptable ways. Behaviourists however, provide the counter argument for this dispute, stating that all behaviour is learnt, and thus a product of the environment. If this really is the case, then no amount of catharsis will solve the problem, but instead amplify it by teaching ways of aggression of violence (Glassman 1979). Despite the contrasting views, both perspectives do provide plausible explanations for aggression and violence and therefore contribute to the overall understanding of this behaviour. However, they are not without their shortcomings. The psychodynamic approaches reasoning behind aggression being innate can be questioned and a lack of experimental research in this area also proves problematic. The behaviourist view also has it weaknesses, the frustration - aggression theory has been discounted by many psychologists due to its over use of frustration as the only reason behind aggression. With other perspectives providing various theories on the origins, cause and control of aggression, it is very difficult to say who has the definitive answer to this problem, and only more research into this area can possibly provide that answer. ...read more.