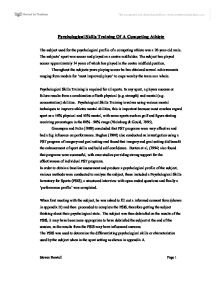 Throughout the subjects years playing soccer he has obtained several achievements ranging from medals for ‘most improved player’ to cups won by the team as a whole.

Psychological Skills Training is required for all sports. In any sport, a players success or failure results from a combination of both physical (e.g. strength) and mental (e.g. concentration) abilities.  Psychological Skills Training involves using various mental techniques to improve athletes mental abilities, this is important because most coaches regard sport as a 50% physical and 50% mental, with some sports such as golf and figure skating receiving percentages in the 80% - 90% range (Weinburg & Gould, 1995).

Greenspan and Feltz (1989) concluded that PST programs were very effective and had a big influence on performance. Hughes (1990) also conducted an investigation using a PST program of imagery and goal setting and found that imagery and goal setting did benefit the enhancement of sport skills and build self-confidence.  Burton et al, (1994) also found that programs were successful, with case studies providing strong support for the effectiveness of individual PST programs.

In order to obtain a baseline assessment and produce a psychological profile of the subject, various methods were conducted to analyse the subject, these included a Psychological Skills Inventory for Sports (PSIS), a structured interview with open-ended questions and finally a ‘performance profile’ was completed.

When first meeting with the subject, he was asked to fill out a informed consent form (shown in appendix D) and then  proceeded to complete the PSIS, therefore getting the subject thinking about their psychological state.  The subject was then debriefed on the results of the PSIS, it may have been more appropriate to have debriefed the subject at the end of the session, as the results from the PSIS may have influenced answers.

The PSIS was used to determine the differentiating psychological skills or characteristics used by the subject when in the sport setting as shown in appendix A.

The PSIS has been found to be internally reliable when used to measure psychological skills and White (1993) recorded that the PSIS had the potential for being a reliable instrument when used with both male and female athletes, rather than elite and non-elite.

Duda (1998) found that the validity was suspect because non-elite athletes sometimes scored higher than elite athletes, this was also reported by Lesser and Murphy cited in Chartrand et al (1992). Chartrand et al (1992) however found that the validity of the instrument relies mainly on what and who is being analyzed. The overall validity of the PSIS is inconclusive as different studies prove different opposing results.

Once debriefed on the PSIS we had a tea break to relieve some of the tension.  After 20 minutes of casual chatting in the canteen, the interview was ready to begin, this was distinguished by the setting; the tea break took place in the canteen, whereas the interview was set in a quiet room.  In order to obtain information effectively the subject needs to feel comfortable, this is supported in an article written by Jane Smith (not dated), she stated, in an effective interview the candidate needs to feel valued and respected, she proceeds to say, the interviewer needs to create the right environment.  The subject was given the questionnaire first, and then had the tea break to informally get to know each other, therefore when the interview was to begin the subject would be relaxed and more comfortable. The subject took time to answer the questions precisely, questions he wasn’t clear on he questioned, e.g. he wasn’t sure what imagery exactly was and pointed this out, this suggested he wanted to be clear on the questions to answer accordingly. The writer believes the answers given were truthful and were not given with a sense of longing to please otherwise the subject would not have wanted to be so precise on the questions asked.

An interview is a good source of data collection because they can identify possible areas for more detailed analysis, which would not be identified in a questionnaire.  They can be modified as necessary, providing the subject’s personal words and views, providing a deepened understanding (Patton, 1990).

After another short break of about 5 minutes, the subject was asked to complete a performance profile.  Performance profiling is a process, which facilitates the athlete’s self-awareness with regard to performance.  Initially the subject was asked to reflect on what qualities are possessed by performers who they think excel at their particular sport. The subject was then asked to consider qualities, which relate to their own performance needs of which they can control. This usually includes physical, technical and psychological (Butler, 1995).Bannister and Fransella, (1986) stated that performance profiling is embedded within the framework of Personal Construct Theory. This means that through asking the performer to describe qualities of their ideal performer provides a vision of the athlete’s ideal perceived performance, therefore creating a ‘goal’.  When conducting a performance profile it is essential that clarification of what the athlete means for each subject is important (Jones, 1993).  This is necessary, as each individual perceives things differently, e.g. one performer might perceive speed as the ability to run quickly, whereas another might perceive it to be the ability to accelerate. A box next to the key word, to interpret the subjects meaning of that word being provided (shown in appendix C) ensured this.  This is a valid and reliable way of gathering data on the performers’ perception of themselves with regards to elite athletes in their area, because it is their own perception there is no right or wrong answers, it merely enlightens self awareness and creates a base for goal setting. Once the subject completed the performance profile, the subject was then again debriefed on the areas that he felt were his strengths, and the areas that he felt he could improve.

The raw data collected from the PSIS (shown in appendix A) showed that the subject had low motivation (36%) and low mental practise skills (33%), the subjects best results were for team focus skills (68%).  The writer believes the answers to some of the questions may not be reliable, when reading some of the questions the writer believes the Likert scale for that question may not be valid:

Question 33 states ‘ when I mentally practise my performance, I see myself performing-just like I was watching on videotape.’ The subject stated that he strongly disagreed with this statement, however the subject got the maximum mark possible, this therefore causing the results to be misleading.

Question 16 states ‘ when I am actually competing, I am almost totally unaware of those watching.’ The subject stated he disagreed with this statement, and obtained a low mark, however just because the subject acknowledges people are watching, it does not mean his confidence is low or suffers as a result.  A performer might like playing in front of an audience.

The data collected in the interview (shown in appendix B) found the subject has used both short term and long term goal setting before. When asked the subject stated he used short-term goals prior to a match e.g. to score a goal, and long-terms goals for the season, e.g. to win player of the year. The subject said goal setting was very useful and also motivating, and still sets goals to date.  He had also used self-talk techniques during a game, the subject used self-talk to gear himself up, so mainly for motivation during a match.  The interviewer had to explain what mental imagery was and when it could be used. The subject proceeded to say he had never really used mental imagery, only once with a penalty. This was positive mental imagery, the subject found it useful but has only tried it from a stationary position and not for purposes which require motion such as a plan of attack on goal.

His motivation lacked during training sessions, when asked why he said 'there was no outcome or reward' he said his motivation was very high during a match or competition due to the reward of winning.

The subjects performance profile (shown in appendix C) was based on David Beckham, this was good because they play in the same position, however if the subject had chosen a striker, the performance profile would not have been as valid.  The outcome from the performance profile showed the subjects views of his strengths were his: speed, flexibility, shooting and passing.  The subject’s views of his challenges were his: visualisation, motivation and concentration.  This backed up his view that his weakest point was his imagery skills previously stated in the interview, with this realised by the subject, his motivation to improve this challenge should be increased.  If the subject did not believe imagery was a challenge to him, he would be less motivated to improve it.

From the data gathered the writer believes the subjects main areas for improvement is mental imagery techniques before and during a game, this will also involve imagery to improve confidence before a game as the subject said he suffered from nerves before a game. The participant stated in the interview that he had ‘never used mental imagery before except once when asked to take a penalty’ shown in appendix A. The subject scored a low 33% on the PSIS questionnaire for mental practise and showed little sign of mental imagery use on his performance profiling results. The subject also needs to increase his motivation to train. The subject said he was not motivated to train because there ‘was no outcome or reward for training’ shown in appendix A. This was also shown in the subjects PSIS, with a low score of 36% and showed little motivation on his performance profiling results.

The subject will therefore subject undergo a PST programme to improve his motivation and mental imagery techniques.  Research suggests that mental practice is as important as physical practice when trying to enhance a skill, Barr et al, (1990) found imagery during competition helped the athlete maintain their focus, have self-confidence about their performance, and retain control of their emotions. This supports the idea that mental imagery could enhance a athletes performance and could be effective in a PST program.

Barr et al, (1990) also found that most athletes considered imagery to be more important during competition than during practice.  This was similar to the subject, however the subject stated his motivation was low during practice.  Motivation is important, in an article written by Michelle Sandman (not dated), she stated ‘winning and losing is part of organized sport’, she said that ‘focus on outcomes rather than performance can be detrimental’. The article was related to young children playing sport, however this applies for all ages, if an athlete has low motivation then his performance will suffer.

Jones, G. (1993). The Role Of Performance Profiling IN Cognitive Behavioural Interventions In Sport. The Sport Psychologist, 7, 160 – 172.

White, S. (1993). The relationship between psychological skills, experience, and practice commitment among collegiate male and female skiers. The Sport Psychologist, 7, 49-57.

THE SKILLS OF INTERVIEWING by Jane Smith