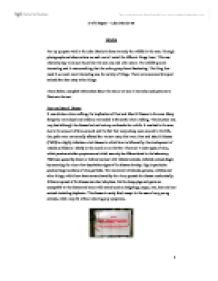 Wildlife For my purpose work in the Lake District I chose to study the wildlife in the area. Through photographs and observations on each route I noted the different things I saw. This was relatively easy to do as I found that the area was rich with nature. The wildlife proved interesting and it was something that the entire group found fascinating. The thing that made it so much more interesting was the variety of things. There were common farmyard animals but also many other things. I have, below, compiled information about the nature we saw. I have also used pictures to illustrate the text. Foot and Mouth Disease It was obvious when walking, the implication of Foot and Mouth Disease in the area. Many footpaths were closed and walkers were asked to be careful when walking. The situation was very bad although the disease had not had any outbreaks for a while. It was bad in the area due to the amount of farms around and the fact that many sheep roam around in the hills. Our paths were not actually affected but we saw many that were. Foot and Mouth Disease (FMD) is a highly infectious viral disease in which fever is followed by the development of vesicles or blisters - chiefly in the mouth or on the feet. There are 7 main types of virus, which produce similar symptoms and which can only be differentiated in the laboratory. ...read more.

These were seen on two days when we were required to walk through large areas of woodland. Squirrels are an abundant species worldwide. This is only the common Grey Squirrel. I was unfortunate not to see a Red Squirrel on the expedition. The Lake District is one of the few areas in Britain, outside Scotland, where this species can be seen. The numbers of Red squirrels have declined due to the fact that the Red squirrels have bred with the Grey Squirrel causing there to be no Red offspring so discontinuing the species. As highly adaptable creatures, squirrels have adjusted well to the urban and suburban landscape. Squirrels primarily consume plant matter, and their diet varies with the seasons. They typically eat and store acorns and other nuts underground, which provide them caches of food for the winter. Spring flowers and growing buds are also eaten as the weather warms. In the summer squirrels often eat fruits and berries. The Buzzard I have an interest in Birds of Prey so I really enjoyed seeing a Buzzard above a forest area. Buzzards are symbolic of the mountainous region, usually seen soaring majestically, riding thermals without a wing-beat, and occasionally stooping to some prey. These are diurnal birds of prey, with hooked bills and powerful talons adapted to hunting. Identification is difficult as they are usually seen at a distance, with no reference for size, and often silhouetted by the sky. ...read more.

They use the Sun in navigation. The Sheep A very uninteresting animal but one I saw everyday without fail on all our routes. We saw a variety of different species that farmers were grazing. Various breeds of sheep are reared worldwide for meat, wool, milk, and cheese, and for rotation on arable land to maintain its fertility. The sheep forms part of an industry that dominates the Lake District. Domestic sheep are descended from wild sheep of the Neolithic Middle East. The original species may be extinct. The dozens of different breeds known across the world were developed to suit different requirements and a range of geographical and climatic conditions. Over 50 breeds of sheep evolved in the UK, but only a small proportion are still in full commercial use. They are grouped into three principal categories. The hardy upland breeds, such as the Scottish Blackface and Welsh Mountain, are able to survive in a bleak, rugged environment. Lowland breeds include the shortwool varieties, such as the Down breeds of Hampshire and Suffolk, which are well adapted to thrive on the lush grassland of lowland areas. The Southdown, from which many of the shortwool varieties are descended, is known for its high quality mutton and fine wool. The longwool varieties, such as the Leicester and Border Leicesters, were originally bred for their coarse, heavy fleeces, but are now crossed with hill-sheep flocks to produce fat lambs. Thank you for reading this report and I hope that it proved useful. ?? ?? ?? ?? D of E Report - Lake District '02 1 ...read more.