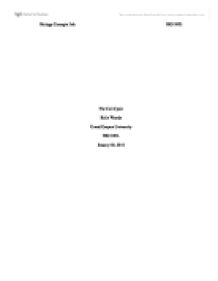 Questions for Cell Cycle 1) Briefly describe all phases of the cell cycle and tell what happens in each.

The Cell Cycle Keila Woods Grand Canyon University BIO 100L January 19, 2011 The Cell Cycle Directions: Answer the following questions. Cite references as needed. Be sure to read the required Module 3 readings and view the required Web sites before completing the assignment. Cell Cycle Questions for Cell Cycle 1) Briefly describe all phases of the cell cycle and tell what happens in each. a) Interphase: Before a cell can enter cell division, it needs to take in nutrients. All of the preparations are done during the interphase. Interphase proceeds in three stages, G1 phase, S phase, G2 phase. Cell division operates in a cycle. Therefore, interphase is preceded by previous cycle mitosis and cytokinesis (Module 3 Reading). a. G1 phase: The cell increases the supply of proteins and increases its organelles. b. S phase: Linear chromosome is replicated. c. G2 phase: Increases protein preparing to replicate. b) M phase: this phase consist of nuclear division karyokinesis. ...read more.

Mitosis is used to repair and replace cells that wear out or die. 2) Briefly describe each phase of mitosis Prophase: nuclear envelope disintegrates, centrioles (microtubules) begin to form on both ends of the cell, and spindle fibers forming Metaphase: spindle fibers attach to centromere (centromere --> holds the sister chromatids together), chromosomes line up in the MIDDLE (connected to spindle fibers) Anaphase: the spindle fibers pull the sister chromatids apart and AWAY from each other to opposite ends of the cell. Telophase: nuclear envelope begins re-forming. Spindle fibers disappear, cell ready to separate into daughter cells (Krogh, 2009). 3) Describe and distinguish between replicated chromosomes and homologous chromosomes. Replicated have a matched pair of chromosomes. Homologous have an unmatched pair. 4) How many pairs of homologous chromosomes are found in the nucleus of a human somatic tissue cell? How many homologous pairs are found in a human gamete? 23 pairs in somatic tissue, and 23 only in the gamete (Krogh, 2009). ...read more.

Gregor Mendel. The metaphase. ( Module 3 Reading). 7) Both crossing over and "Independent Assortment" add genetic variation. How is genetic variation important to natural selection and adaptation? Because if there wasn't independent assortment everyone would be the same! Meiosis II Questions for Meiosis II: 1) Briefly describe what happens in each phase of Meiosis II. Prophase: Strands of DNA form replicated chromosomes. They migrate to the poles while the nuclear envelope disappears. Metaphase Cell lines up along the equator and spindles appear and attach to the chromosomes. Anaphase Spindle fiber pulls the chromosomes apart and they migrate to the poles of the cell. Telophase: The cell divides and the chromosomes uncoil while the nuclear envelope reforms (Module 3 Reading). 2) In a female, the products of meiosis are referred to as ___eggs_________. In a male these cells are referred to as __sperm___________. 3) What is it called when chromosomes in meiosis fail to separate and travel together as the gametes are formed? Mutations that result in an abnormal number of chromosomes Nondisjunction occurs when chromosome fail to separate during meiosis. ( Krogh, 2009). Name 1 genetic condition caused by the failure of chromosomes to separate in Meiosis. ...read more.