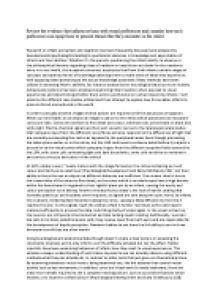 Review the evidence that infants are born with visual preferences and consider how such preferences can equip them to process stimuli that they encounter in the world.

﻿Review the evidence that infants are born with visual preferences and consider how such preferences can equip them to process stimuli that they encounter in the world. Research on infant perception and cognition has been frequently discussed and analysed by developmental psychologists leading to spectacular advances in knowledge and appreciation of infants and their abilities. Whether it?s the parents questioning the infants ability to observe or the philosophical theories regarding ideas of nativism or empiricism as a basis for the newborns entry in to our world, the accepted consensus acquiesces that from birth infants contain ranges of concepts and abstract forms of knowledge allowing them to make sense of what they experience, with opposing ideas pertaining to the actual knowledge possessed. Many methods have been utilized in assessing infant?s abilities, for instance anatomical or neurological data but more recently behavioural evidence has been employed examining infant reaction when exposed to visual experiences and determining whether there exists a preference on certain objects by infants. I will examine the different case studies utilized and then attempt to explain how this enables infants to process stimuli encountered in the world. In order to actually observe images diverse actions are required until the actual picture appears. When our lens fixates on an object an image is cast on to the retina which possesses two receptors- cones and rods. Cones are sensitive to fine detail and colour, whereas rods concentrate on black and white light. ...read more.

Seemingly, infants prefer simplicity over concentrated and complicated stimuli. Several investigators have found that infants have an inborn preference for what is familiar, for instance, they prefer their mothers face over a strangers face very soon after birth. Different studies have been taken in order to determine whether infants have visual preferences. Most famous is Frantz who found a simple and reliable technique to test infants. Known as the visual preference paradigm it works by someone presenting two stimuli to the child one containing fine detail and one which is a uniform grey and recording the total amount of times the baby spends looking. Commonly referred to as `forced- choice preferential looking` ,its noted advantage is that the observers judgement is not influenced as its not known which stimuli is being presented (Psychological Development and Early Childhood p.102) . Through this method one can infer that apart from the fact that the child can discriminate between two stimuli?s, it has preferences also. This procedure isn?t limited to testing visual acuity, scientists have been using it to examine topics ranging from pattern perception preferences for complexity, and even face perception. In a similar vein when no initial preference is shown we can present the infants with a new exemplar of the familiar category that they haven?t seen before as well as a new exemplar from a contrasting category. If the infant has formed a representation of the known category then it should prefer to look at the example from the new group, even though both items presented at test are novel stimuli. ...read more.

Constructed by Gibson and Walks, a visual cliff was enacted where the child is made to crawl over a large area that seems to have a large drop in the middle. It was found that out of 27 children only three ignored the drop whereas the rest feared to continue. (Psychological Development and Early Childhood p.108). This an intrinsic survival tool required for a child to identify as it helps the child recognize edges and drops and determines which of two objects is closer. Survival would be impossible if the infant could not perceive depth; it would run into things and be unable to judge how far away a predator was. Even though we do see that has a child has a depth perception but the results don?t prove that it?s an innate skill, as infants tested were between six months to a year (as beforehand they couldn?t crawl) and by then they had already learned many skills. Explanation of the development of preferences might not augment our general understanding of the development of an infants vision, for instance it doesn?t actually tell us whether a three month old child will be able to see more. However the evidence presented here does suggest that the infant enters the world with some sort of inbuilt knowledge of our world and equipped with certain skills and maybe even images of the human face that enables the infant to learn from its surroundings. Additionally, an infant seems to show preferences of naturalistic situations for instance three dimensions, perhaps to facilitate a coherent idea in how to act.(Psychological Development And Early Childhood p.109). ...read more.