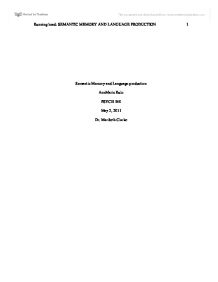 Semantic Memory and Language production AnnMarie Eulo PSYCH 560 May 2, 2011 Dr. Maribeth Clarke Semantic Memory and Language production Throughout the history of psychology, the human brain has been a mystery and a challenge among the psychology world. The human brain is considered a warehouse of information and knowledge, in which language is directly relevant within this warehouse. Language plays a major role in comprehension as well as semantic and structural constraints that make some words more likely to be produced than others, this is considered language production. Within the terms of the relationship of language to memory, Goldstein (2009) defines memory as all of the operations and processes involved in acquiring, storing, retaining, and retrieving information. However, it must be noted that there are many types of memory such as long-term memory, short-term memory, episodic memory, etc, that also contributes to memory access and language production. Within this paper, the subject that will be examined and discuss is the semantic memory and language production, the nature and functions of semantic memory, basic functions of language, the stages of language production and the relationship between them. ...read more.

Basic functions of language Newmeyer (2000) concludes that language has three basic functions. The first function is an informative function, which is the communication of information. This function is important for logic in that it affirms or denies the validity of claim; it also describes the world and reasons about it. A determination of truth value associates with the informative function. The second function of language, according to Newmeyer (2000), is expressive. This function allows the communication of an individual's feelings and the expression of that individual's attitudes to others. The function can also evoke feelings in others. Poetry can be an example of expressive function. The third function of language is directive. This is a command and request function, for example, "Please close the door" or Could I ask you to please close that door?" It is important to note that in any given communication; more than one function of language is taking place. According to Halbeisen (2010, p. 1), "the connection between semantic memory and language can be found in the fact that language involves a highly complex set of rules, which secures human beings position at the top of the taxonomic scale." ...read more.

In the study, Kuperberg (2008), found that automatic activity in semantic memory was qualitatively different in schizophrenics compared to patients, which did not have disordered thought processes. It was concluded that semantic memory is called upon to play a larger than normal role in the language production of schizophrenics than it is with people not thought disordered, What this study shows is the direct connection between the coherent production of language and semantic memory. However, the exact nature of the relationship that describes this connection is yet to be determined. As noted by Goldstein (2009), there are many theories or conceptualizations but no one theory stands out as the definitive explanation. Rather, each theory has some support. Conclusion The human brain is a warehouse of information and knowledge that allows individuals to acquire, store, retain, and retrieve information such as language. The mind is still a mystery and complex in the world of psychology, but with further investigation and research, the nature between semantic memory and language among other types of memory can be determined that can help individuals unfortunate to communicate. ...read more.