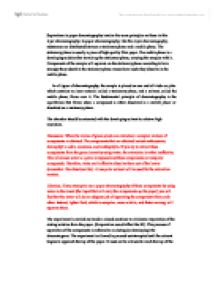 (Evaporation would affect the Rf). This process of separation of the components is referred to as eluting (or developing) the chromatogram. The experiment is allowed to proceed uninterrupted until the solvent begins to approach the top of the paper. It must not be allowed to reach the top of the paper, otherwise separated components may again catch up with each other and recombine at the top. To stop the chromatogram, the paper is simply removed from its container and dried to remove the mobile phase. In paper chromatography, when you place a colored chemical sample on a filter paper, you can get the colors to separate from the sample by placing one end of the paper in a solvent. As the solvent diffuses up the paper, it dissolves the various molecules in the sample according to the polarities of the molecules and the solvent. If the sample contains more than one color, that means it must have more than one kind of molecule. ...read more.

water, ethyl alcohol, and hexane. As the liquid moves up the paper, the molecules of the sample mixture will also move. Polar molecules within the sample will spend most of their time bound to the polar surface of the paper and will therefore not move very much. Nonpolar molecules, however, will spend most of their time dissolved in the liquid as it moves up the paper. When the liquid reaches the top of the paper, these molecules will also have traveled most of the way to the top. The two types of molecules (polar and nonpolar) are now separated. The choice of the eluent or solvent is the most difficult task. Choosing the right polarity is critical because this determines the level of separation that will be achieved ( this degree of separation helps one to identify the constitute molecules). Common solvents used in chromatography, in order of increasing polarity, are: petroleum, ether or hexanes, cyclohexanes, toluene, chloroform, ethyl ether, acetone, ethanol, methanol, and water. ...read more.