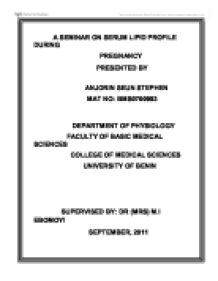 A SEMINAR ON SERUM LIPID PROFILE DURING PREGNANCY PRESENTED BY ANJORIN SEUN STEPHEN MAT NO: BMS0700993 DEPARTMENT OF PHYSIOLOGY FACULTY OF BASIC MEDICAL SCIENCES COLLEGE OF MEDICAL SCIENCES UNIVERSITY OF BENIN SUPERVISED BY: DR (MRS) M.I EBOMOYI SEPTEMBER, 2011 SUMMARY During pregnancy, women undergo many physiological changes which are entirely normal including cardiovascular, hematologic, metabolic, renal and respiratory changes that become very important in the event of complications. These changes in physiological and homeostatic mechanisms during pregnancy are to ensure the fetus is well provided for. Pregnancy has being found to be associated with changes in lipid profile (Total cholesterol TC, Low-Density lipoprotein LDL, Triaclylglycerol TAG and High-Density lipoprotein HDL) and this differs with each trimester Some previous studies had showed that the most dramatic change in the lipid profile in normal pregnancy is serum hypertriglyceridemia, which may be as high as two to three folds in the third trimester over the levels in non pregnant women (Idonije et al., 2011; Chiang et al., 1995). The major physiologic function of the increase in the maternal lipid profile during pregnancy especially in the third trimester is in response to the maternal switch from carbohydrate to fat metabolism which is an alternative pathway for energy generation due to high energy demand (Idonije et al., 2011). Hormonal changes during pregnancy are the major cause of these changes in lipid profile during pregnancy. Arteriosclerosis, coronary heart disease, pre-emclampsia and acne are some of the adverse effect of elevated lipid profile observed during pregnancy. SERUM LIPID PROFILE DURING PREGNANCY INTRODUCTION Alteration in concentration of major lipids like cholesterol, high-density lipoprotein cholesterol (HDL-C), low -density lipoprotein cholesterol (LDL-C) and triglycerides (TG) and others can give useful information about the functioning of the heart (Chawla, 1999). For example, about 56% of global ischaemic diseases are known to be caused by high cholesterol level. Pregnancy which can simply be defined as the carrying of one or more offspring, known as a fetus or embryo inside the womb of a female has ...read more.

The change in triacylglycerols in normal pregnancy is important in relation to lipoprotein subclasses, such as LDL. These lipoproteins contain discrete subfractions of various sizes, densities and compositions, which differ in their ability to initiate atherogenesis (Rajman et al., 1994). For example, small, dense LDL particles do not bind readily to the LDL receptor and therefore remain in the circulation for longer. They also penetrate the arterial intima better than do larger ones and they are more readily oxidized, possibly because they contain less vitamin E and other antioxidants (Tribble et al., 1994). Finally, their uptake into macrophages to create foam cells, thus initiate atherogenesis. This may explain their identification as an independent risk factor for coronary heart disease. HIGH-DENSITY LIPOPROTEIN (HDL) Low density lipoprotein is also one of the five major groups of lipoprotein that enable transport of lipid like cholesterol and triglycerides within water-based bloodstream. In healthy individual, they are the smallest of all lipoprotein particles and are the densest because they contain highest portion of protein to cholesterol. About 30% of blood cholesterol is carried by HDL. It is considered to have anti-atherogenic properties since there is negative correlation between HDL and risk of cardiovascular disease, for HDL transport cholesterol from peripheral tissue to liver thereby reducing the amount of steroids in tissue and possibility of developing atherosclerotic plague and hence termed good cholesterol (Yakubu et al., 2008). High-density lipoprotein is considered normal when it is less than 40mg/dl and observed to be significantly higher in females than in males (syed et al., 2005). Although not significant, in the first trimester of pregnancy, there is an increase in HDL but also slightly lower values of HDL in the second trimester was observed when compared with the first trimester of pregnancy especially between 22nd to 24th week of pregnancy. It increases during the third trimester when compared with the first trimester of pregnancy. ...read more.