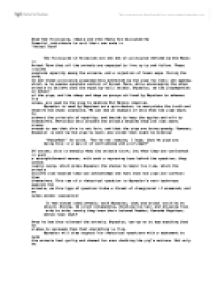 Show How Principles, Ideals and even Facts Are Corrupted By Powerful individuals to suit their own ends in &amp;#145;Animal Farm&amp;#146;

Show How Principles, Ideals and even Facts Are Corrupted By Powerful individuals to suit their own ends in 'Animal Farm' The Principles of Animalism are the set of principles devised by Old Major in Animal Farm that all the animals are expected to live up to and follow. These include complete equality among the animals, and a rejection of human ways. During the tale, we see these principles progressively subverted by the pigs for their own agenda, which is to assume complete control of Animal Farm, while encouraging the other animals to believe that the equality still exists. Squealer, as the propagandist on behalf of the pigs, and the sheep and dogs as groups utilised by Napoleon to advance his cause, are used by the pigs to destroy Old Majors idealism. Squealer is used by Napoleon as a spin-doctor, to manipulate the truth and deceive the other creatures. We can see an example of this when the pigs start to subvert the principle of equality, and decide to keep the apples and milk to themselves. Obviously this arouses the animals because they are just about clever enough to see that this is not fair, and that the pigs are being greedy. ...read more.

He can make them believe this by calling them 'Comrades'. He instils the trust in them, and then can exploit their belief in his truthfulness: Reading out the figures in a shrill, rapid voice, he proved to them in detail..................The animals believed every word of it. Whatever else is happening, and no matter how much the other pigs are distancing themselves, the animals will always trust Squealer to be giving them honest information. Napoleon uses the sheep to cause confusion and disrupt the animals' train of thought. This is centred around their ability to be taught something and then repeat it for as long as desired. Because of a complete lack of intelligence on their part, they do not actually have their own opinions on any matter, and even to teach them simple phrases takes its time. They are very useful though in quashing any signs of rebellion on the part of the animals, because they simply do not allow anyone to have any form of say by the sheer amount of noise they create: Frightened though they were, some of the animals might possibly have protested, but at this moment the sheep set up their usual bleating of 'Four legs good, two legs bad', which put an end to the discussion. ...read more.

All in all, the pigs use many methods with which to subvert the principles of Animalism. The use of fear is key to controlling the animals, and is used by both the dogs and Squealer, but in different ways; Squealer uses words to scare the animals into submission, while the dogs actually hold a force which they demonstrate regularly. Another method is that which is employed by the sheep, which is on the whole very different, yet very effective. By means of creating noise in the form of a repeated slogan, the sheep confuse the animals thoughts, and remove the opportunity for debate or argument. All of this goes towards making the animals passive in preparation for the final subversion of Animalism; the final great shift where the pigs make the transition from the animal to the human, the very same force that the animals strived to defeat and against whom they gained their independance in the first place (this shift meaning that all that the animals have done is worth nothing, as they are back where they started, perhaps with even less, as now they have no hope with which to console themselves; everything has been removed form them). The cruel methods the pigs use reflects their cruel goal, and ultimately their likeness to humans in every way. ...read more.