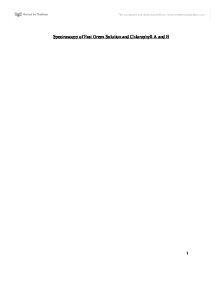 Spectroscopy of Fast Green Solution and Chlorophyll A and B

Table 2) The Absorption Values of each Concentration of Fast Green at Wavelength 625nm Fast Green Solution Concentration (mg/mL) Absorption(A) 1.5 � 10-2 0.970 7.5 � 10-3 0.440 3.75 � 10-3 0.257 1.875 � 10-3 0.169 9.375 � 10-4 0.119 Unknown # 207 0.666 Table 2 shows the results of the testing absorptions of the different known concentrations of fast green solution and of the unknown # 207. The absorbances are all measured at the wavelength of 625nm. Figure 1) Concentration Curve illustrating the Absorbance at Wavelength 625 nm Figure 1 illustrates the results for the concentration curve of test tubes one through five of this experiment at a wavelength of 625 nm. This is done so the concentration of the unknown # 207 can be calculated. The equation of the line of best fit is y = 0.1694x - 0.1561. By analysing the graph the concentration of the unknown may be about 1.125 � 10-2mg/mL. Figure 2) Drawing of Chromatogram of Chloroplast Pigments from Homogenized Spinach The chromatogram illustrates the four chloroplast pigments which where separated from a chloroplast extract. The solvent, 90 petroleum ether: 10 acetone, dissolved the extract and allowed the pigments to migrate along the matrix. Carotene moved up the highest and it is the colour orange. Next is the yellow Xanthophylls, then the green chlorophyll A and finally the olive green chlorophyll B. Table 3) ...read more.

These layers were very specific carotene (orange) at the top, xanthophylls below (yellow), and following this was chlorophyll A and B. (Karp, 2010) The solvent, 90 petroleum ether : 10 acetone, allowed the pigments to migrate up the matrix, chromatography paper. These pigments are compounds that appear coloured because they absorb only certain wavelength of light in the visible spectrum. Leaves on most plants are green because they contain chlorophyll. (Karp, 2010) Chlorophyll absorbs the red and blue light of the spectrum which leaves the colour green to be reflected to our eyes. (Karp, 2010) As seen in Figure 3, the chlorophyll A peaks at wavelengths 430 nm and 665nm and chlorophyll B peaks at the wavelengths 455 nm and 640 nm. Visible light ranges from 390nm to 760nm. (Petrucci, 2010) The colours which correspond with the peak wavelengths are blue which is between 450nm to 500nm and red which is between 650 nm to 700nm. (Petrucci, 2010) The chlorophyll absorbs the red and blue visible light photons which is used in photosynthesis. (Karp, 2010) Because the chlorophyll does not absorb the green light it is reflected. Since the human eye is able to detect wavelengths of light between 400 nm and 750nm, it is able to pick up the green wavelengths which have a wavelength of 500nm to 550nm. (Karp, 2010) In conclusion, this lab experiment helped be become familiarized with spectroscopy and learn measure the concentration of an unknown solution and isolate the individual pigments of a chloroplast extract to measure the light absorption of chlorophyll A and B. ...read more.