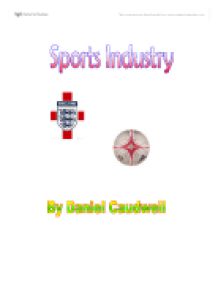 Sport industry.The sport industry is important to many people whop work in it and those people who use the products and the services it offers. There are three main sectors of sports which are

COLLABORATION AND COMPETITION. Sport has important benefits for individuals and the country. The sport industry is important to many people whop work in it and those people who use the products and the services it offers. There are three main sectors of sports which are: * The public sector- organisations which the government put the money into the business to keep it running, For example: Herring Thorpe leisure centre. The aims for the public sector are that they provide sports for people in local areas for a reasonable price and are not the best quality of facility. This sector isn't really built for making a profit; it is mainly for the local people to participate in sport and to keep them fit and healthy. The organisation of the public sector is good but if there is not enou money being made then they can close it down or close just the main attraction down which could be things like a swimming pool or a sports hall if a shortage of money. The people who participate in this sector are the local people who have a good interest in sport and want to keep fit and healthy. The public sectors funding isn't to make a profit it is just to provide sports for the local people and for them to keep fit. * The private sector- an organisation which aims to make a profit from the business for themselves and other people. These are private clubs which provide facilities for members. The aims that the private sectors have are that they want to make a profit from the business not just for themselves but for other people as well and to provide a club and facilities for the members to use. The private sector is mainly for making a profit for themselves and others. The profit that they make is then reinvested back into the company or is distributed to people and organisations who have invested money for their business. ...read more.

Some fund raising can be successful for example: if they needed money for a new stand they could say pay so much and you could have your name in graved on a brick in the stand. Report of which type of fund raising I would use: I feel that the best sources of fund raising are the sponsorship and income from the mass media. There are a lot of ways to raise money for the centre but I am going to write about the ones that I think I would use in my centre and the best ways to fund raise. The type of fund raising I would use in my sports centre would be: Sponsorship: I would use sponsorship in my centre because you don't just get the money from their advertisement you also get publicity, because when they sponsor you then you get your sports centre advertised to almost everyone because they could either have you on the television or put posters all over. The good things for them if they sponsor your centre is that when people go to the centre they see the name of sponsor and then they go to the shops to see what it is like, this means that the sponsor will get people buying there clothes or equipment that they sell because the people that see the sign may think that it is a good company. Sponsorship would help out my sports centre because it would fetch money into the centre so that they would be able to either buy new equipment or introduce a new sport. If they bout some new equipment they would be able to get it cheaper because they are sponsoring them. I think that sponsorship is one of the best ways of helping out my sports centre because it will get sponsors and advertisement as well as getting money to put towards the sports centre. ...read more.

My other sport I have talked about is football and that gets a lot of media coverage. This affects the media coverage because when something bad happens during a match that is on live on the television then everyone can see what happens so when the younger people see it they think that it is ok to do what they have seen so they do it in their match. When this happens it changes people's views of football and it makes more people think that it is a bad sport if things like this keep happening. My suggestions for the media that are the FA benefits the media they could put the match of day highlights on in the morning at the weekend for the younger children to watch it so they get more interested in sports at a young age (football). The media could also have a referee on the match of the day as well as an old football player, to be able to say why the referee made that decision and what decision they would give. Also the FA could put more football on in around the world so that when they go on there tours the people in the other countries will know who they are so they will want to get some of the team's or players merchandises and so that they other people know how good they are. My suggestions for the media and the Olympics are that they could put more Olympics on around the world so that it gets more people interested in the Olympics and taking part. Many things can be done to get the Olympics better but they haven't done it so I am going to say a few things that I think they could do to get more people interested in the Olympics. The media could show some of the athletes stretching of so that they people who start to take up the Olympics will stretch of before they start running so they don't do themselves any damage. ...read more.