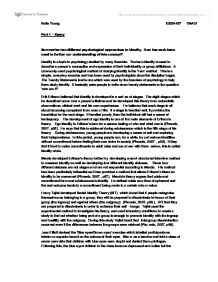 Summarise two different psychological approaches to identity. How has each been used to further our understanding of this concept?

Part 1 - Essay Summarise two different psychological approaches to identity. How has each been used to further our understanding of this concept? Identity is a topic in psychology studied by many theorists. The term identity is used to describe a person's conception and expression of their individuality or group affiliations. A commonly used psychological method of studying identity is the 'I am' method. This is a simple, everyday exercise and has been used by psychologists since the discipline began. The Twenty Statements test is one which was used by the founders of psychology to help them study identity. It basically asks people to write down twenty statements to the question 'who am i?'. Erik Erikson believed that identity is developed in a series of stages. The eight stages which he described occur over a person's lifetime and he developed this theory from naturalistic observations, clinical work and his own experiences. He believes that each stage is all about becoming competent in an area of life. If a stage is handled well, it provides the foundation for the next stage. If handled poorly, then the individual will feel a sense of inadequacy. The development of ego identity is one of the main elements of Erikson's theory. Ego identity is Erikson's term for a secure feeling of who and what one is (Phoenix, 2007, p55). ...read more.

Elliot's theory supported SIT but is ethically doubtful. Elliot was not a psychologist and so was not bound by the Code of Ethics. She subjected the children to discrimination and risked them being bullied because of what she said about their eye colour. Both of these theories can be used to further our understanding by applying them to everyday situations such as disability and bullying. Embodiment indicates that we live in and through our bodies and that we simultaneously experience our bodies physically and biologically as well as socially and psychologically (Phoenix, 2007, p49). This is important to identity and is most evident when looking at people who are disabled or who have physical impairments. SIT suggests that people can change their identity throughout their lives and allows more possibilities for these changes than the phsychosocial theory. It suggests that it is the change of belonging to a group that leads to a consciousness of identity. This occurs when people become physically impaired in adulthood. According to the psychosocial theory, embodied identities can also play a major part in adolescence for young people without physical impairments. During this time their can be things like eating disorders etc. that occur. This phsychosocial theory does not allow for changes to identity through peoples life course. The two theories that have been looked at both play major parts in furthering our understanding of identity. ...read more.

B - There are a number of ethical issues wrong with this study as it has been conducted with children. If Roger did not gain consent from the parents of the children and only in principal from the school he would need to take it to the Ethics Committee to get approval before going ahead with it. Question 2 A I - It does not say in the study whether informed consent was gained but it would need to be. The participants need to be informed all the participants of the objectives of the investigation before it starts. A ii - The description of the experiment does not say whether or not the participants were given the right to withdraw at anytime or not. As stated in 6.1 of the Conducting Research with Human Participants documents, investigators should make plain to the participants that they can withdraw at any time. A iii - A iv - There isn't really a confidentiality issue with this part of the study but the research must remember to inform the participants that they will be anonymous. B - Reading the study it does not say if the participants gave informed consent, were given the right to withdraw or were debriefed at the end of it. As long as these things were done I think the study meets contemporary ethical standards. This study was conducted in 1973 which is before the BPS brought out the code of ethics so a few things would need to be checked now before it could go ahead. ...read more.