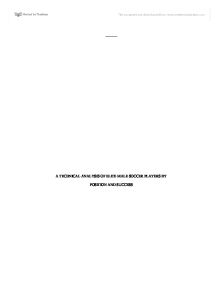 Continuum of technique ratings Rating Operational Definition +3 Excellent technique performed under pressure +2 Very good technique performed under slight pressure +1 Good technique performed under no pressure 0 Average, standard technique -1 Poor technique performed under pressure -2 Very poor technique performed under slight pressure -3 Unacceptable technique performed under no pressure The playing surface was divided by the researchers into distinct areas to allow a more detailed analysis of the techniques performed within a game. Having a perception of an actions pitch location gives a more accurate assessment of the conditions in which the action was completed. Figure 1. Pitch division example as used in analysis (adapted from James et al, 2002). Figure 1. Pitch division example as used in analysis (adapted from James et al., 2002). This pitch division was chosen as it breaks down the playing surface into strategic, fairly broad, easily identifiable areas. The subdivisions of the penalty area were added from James et al., (2002) pitch division to allow for a greater depth of analysis in this critical area of the field. 3.6 Data Processing Data were tabulated and then entered into Microsoft Excel computer package for analysis. The Chi squared test of independence was used to determine whether differences between the results were statistically significant. The Chi-Squared test of independence is a statistical test which provides the significance value of the difference between the observed and expected results. It provides the probability of a Type 1 Error (Thomas and Nelson, 2001). For an identified difference to be significant, the reported P value must be 0.05 or lower (p<0.05) to be accepted at the 95% level of significance (Vincent, 1999). 3.7 Validity and Reliability It is vital that the reliability of a data gathering system is clearly demonstrated (Hughes et al., 2002). As stated in section 3.2.1. all researchers collectively went through a series of operator training sessions in order to increase familiarity and reliability of the data. ...read more.

A significant difference (p<0.05) was however apparent between the frequency distribution of goalkeepers actions between successful and unsuccessful teams. 6.2 Recommendations for players and coaches From the reported results it can be inferred that players and coaches alike must recognise that significant differences do occur between the outfield playing positions of association football. The defined results can be of impact to a coach in 2 ways: i. By helping to align certain players into specific playing positions according to their individual technical attributes ii. By revealing specific aspects of performance across positions which could be either stabilised or enhanced within a training context (Bate, 1996). 6.3 Future recommendations There are many direct extensions of the study available to enhance this work further. A Kruskal-Wallis and Mann Witney post hoc test (Vincent, 1999) could be utilised to calculate the significance of differences between variables. This type of statistical test may establish further significance between either the average technical ratings or between successful and unsuccessful teams. This test could be assisted by analysing more games, consequently producing more data which may influence any significance values (Hughes et al., 2002). A detailed within position analysis could also be devised to break down the positional subdivisions even further. For example defenders could be further grouped into exact roles as full backs, centre backs and sweepers. An alteration and further detailing of the operational definitions themselves may also generate further findings. Heading the ball could have been detailed further as either attacking or defensive, hence giving a new dimension to any generated data. Studying the changes in techniques used in different areas of the pitch or in different time periods would enable extra data to be generated, also enabling a comparison between successful and unsuccessful teams. By using the presented system a multitude of differing comparisons are instantly available: i. Comparing each team within the Championship to investigate which team is the most technically astute. ii. Comparing different levels of competition. iii. Investigating the differences between the men's and women's game. ...read more.