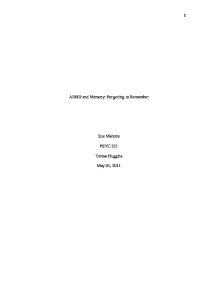 ADHD and Memory: Forgetting to Remember Sue Mahone PSYC 321 Teresa Huggins May 01, 2011 ADHD and Memory: Forgetting to Remember Attention Deficit Hyperactivity Disorder (ADHD) is often misunderstood because many of the characteristics associated with ADHD, like attention problems and forgetfulness are symptoms that everyone experiences from time to time. A current song by Francesca Battistelli opens with "I've lost my keys in the great unknown, and call me please cause I can't find my phone" (Battistelli, 2011). This statement could be about anyone at one time or another but for those with ADHD, it may be more often unless they find ways to manage their symptoms. This paper aims to better understand how forgetting to remember affects those with ADHD. Individuals with ADHD suffer from problems with attention, impulsivity and hyperactivity and the consequences of these deficits can affect all aspects of life (Re, Franchis, Cornoldi, 2010). ADHD is diagnosed using different subgroups including ADHD-Combined and ADHD-I (Castel, Lee, Humphreys & Moore, 2011). The ADHD-Combined subtype exhibits problems with attention, impulsivity and hyperactivity whereas the ADHD-I subtype exhibits problems with attention primarily. Studying memory and ADHD may better help us understand the differences between the three. ...read more.

The researchers hypothesized that the groups set forth in this study, including the control group, would not greatly differ in word recall ability. They also hypothesized that the children diagnosed with ADHD would not perform as well on the points earned task. In addition the researchers were evaluating whether the points earned task could be learned with practice. Castel's study included 116 children ages 6-9. A total of 57 children had been diagnosed with ADHD and 59 did not have ADHD. Of the 57 children with ADHD, 25 were diagnosed with ADHD-I and 32 had the Combined subtype of ADHD. Diagnoses were validated using the Diagnostic and Statistical Manual of Mental Disorders, 4th Edition (DISC-IV) assessments provided by parents and collaborating assessments from teachers. All children had an IQ score of 70 or higher verified by testing on the Wechsler Intelligence Scale for Children IV (WISC-IV). Reading ability was also controlled to ensure the children had similar reading abilities. Students were asked to recall words that were assigned different numbers of points in order to try to get as many points as possible to earn a small reward. The researchers explained to the children that this would be done by remembering the words that had the highest points. ...read more.

This means that they were able to remember a comparable number of items from the second half of the list but not from the first part of the list. These findings suggest that individuals with ADHD may have deficits in regards to secondary memory. The slight variance in IQ was not found to be significant. In summary, all three studies give evidence that children with ADHD have problems with working memory. In addition, the working memory problems persist across broad age groups. Another commonality found in the first two studies the correlation between increased prevalence of ADHD symptoms and poorer performance on memory tests. These studies begin to narrow down and define the problem of working memory in individuals with ADHD. The first two studies demonstrated that memory problems were prevalent when a second memory task was added. In addition, the second and third studies demonstrated that memory capacity was not affected when another variable was not present as demonstrated when groups with ADHD were able to recall as many words as the other groups. More research should be done on memory and ADHD including testing long term memory to see if children with ADHD are retaining learning the same as their peers. Memory research should include adults with ADHD to understand if memory problems persist or improve. ...read more.