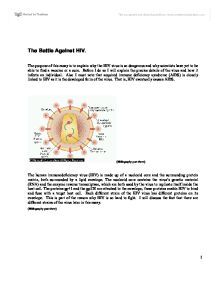 The Battle Against HIV.

The Battle Against HIV. The purpose of this essay is to explain why the HIV virus is so dangerous and why scientists have yet to be able to find a vaccine or a cure. Before I do so I will explain the precise details of the virus and how it infects an individual. Also I must note that acquired immune deficiency syndrome (AIDS) is closely linked to HIV as it is the developed form of the virus. That is, HIV eventually causes AIDS. (Bibliography part three) The human immunodeficiency virus (HIV) is made up of a nucleoid core and the surrounding protein matrix, both surrounded by a lipid envelope. The nucleoid core contains the virus's genetic material (RNA) and the enzyme reverse transcriptase, which are both used by the virus to replicate itself inside the host cell. The proteins gp41 and the gp120 are attached to the envelope; these proteins enable HIV to bind and fuse with a target host cell. ...read more.

* Sharing a needle with someone who's infected. * Being born when the mother is infected, or drinking the breast milk of an infected woman. Getting a transfusion of blood from an infected blood donor used to be a way people got AIDS, but now the blood supply is screened very carefully and the risk is extremely low. There are no documented cases of HIV being transmitted by tears or saliva, but it is possible to catch HIV through oral sex, especially if you have open sores in your mouth or bleeding gums. In the United States, there are about 800,000 to 900,000 people who are HIV-positive. Over 300,000 people are living with AIDS. Each year, there are about 40,000 new infections. In the mid-1990s, AIDS was a leading cause of death. However, newer treatments have cut the AIDS death rate significantly. (Bibliography part four) AIDS stands for Acquired Immune Deficiency Syndrome: * Acquired means you can catch it. ...read more.

Many scientists fear that it will not be possible to fully rid the virus from the body, no matter how good the drugs become or how early treatment is started. Over time, the virus "mutates" or changes itself enough so that these drugs no longer affect it. This process is called viral resistance and is likely to happen with almost all anti-HIV drugs to some degree. It is still clear, however, that suppressing the virus from replicating lengthens survival time and it may be possible, with truly effective therapy, to live out a normal life span despite HIV infection. Even with the limitations of current therapies, however, there is evidence that the use of potent anti-HIV therapy has had a dramatic impact on decreasing death rates and increasing life and quality of life of people living with HIV. The drugs are not without the risk of side effects, however, and potential short- and long-term side effects must be weighed against their potential short- and long-term benefits when making decisions about using anti-HIV therapies, particularly when considering when to start therapy. ...read more.