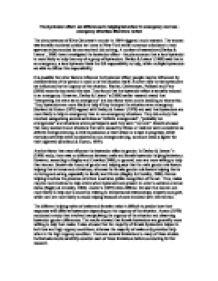 The bystander effect: sex differences in helping behaviour in emergency and non-emergency situations literature review The circumstances of Kitty Genovese's murder in 1964 triggered much research. The woman was brutally murdered outside her home in New York while numerous onlookers in their apartments (surrounded by one another) did nothing. A number of researchers (Darley & Latane�, 1968) have investigated the bystander effect-the phenomenon that a lone bystander is more likely to help than any of a group of bystanders. Darley & Latane� (1968) said that in an emergency, a lone bystander feels the full responsibility to help, while multiple bystanders are able to diffuse this responsibility. It is possible that other factors influence the bystander effect; people may be influenced by characteristics of the person in need or of the situation itself. ...read more.

Shotland & Huston (1979) agreed with Darley & Latane� (1978) and said that bystanders are more likely to help in emergency than in non-emergency situations. They did a study that involved categorising several activities as "definite emergencies", "probably not emergencies" and situations where participants said they were "not sure". Results showed that many accidents and situations that were caused by illness or violence were considered as definite emergencies (eg. a child is poisoned, a heart attack or a rape in progress), while everyday activities were considered as non-emergencies (eg. someone needs a lighter for their cigarette) (Shotland & Huston, 1979). Another factor that may influence the bystander effect is gender. In Darley & Latane�'s (1968) ...read more.

Austen's (1979) view differed. He said that women are more likely to help due to concerns relating to interpersonal relationships, empathy and guilt, while men are more likely to avoid helping because of costs involved with intervention. The different helping styles of males and females make it difficult to predict how their responses will differ as bystanders depending on the urgency of the situation. Austen (1979) conducted a study that involved manipulating the urgency of the situation and observing bystander gender differences. The results showed that female bystanders are generally more willing to help than males. It also showed that the majority of female bystanders helped in both low and high urgency conditions, whereas the majority of males only provided help when in the high urgency condition. There are several limitations to many of these studies. Individuals should carefully consider each of these limitations before conducting further research. ...read more.