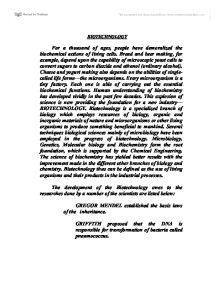 The development of the Biotechnology.

BIOTECHNOLOGY For a thousand of ages, people have demoralized the biochemical actions of living cells. Bread and beer making, for example, depend upon the capability of microscopic yeast cells to convert sugars to carbon dioxide and ethanol (ordinary alcohol). Cheese and yogurt making also depends on the abilities of single-celled life forms-the microorganisms. Every microorganism is a tiny factory. Each one is able of carrying out the essential biochemical functions. Human understanding of biochemistry has developed vividly in the past few decades. This explosion of science is now providing the foundation for a new industry-BIOTECHNOLOGY. Biotechnology is a specialized branch of biology which employs resources of biology, organic and inorganic materials of nature and microorganisms or other living organisms to produce something beneficial to mankind. Several techniques biological sciences mainly of microbiology have been employed in the progress of biotechnology. Microbiology, Genetics, Molecular biology and Biochemistry form the root foundation, which is supported by the Chemical Engineering. ...read more.

Thus, this development in the field of Biotechnology in India has let India in the path of the progress in the fields of the Biology. Besides, the development of the Biotechnology, it also have some major importance of biotechnology such as it helps in the social and economical evolution of the mankind. The influences of biotechnology can be seen in the fields of agriculture, industries and hygiene. It has affected the standard of living of mankind. The achievements in this field has opened up techniques like the synthesis of new genes, introduction of genes of one organism into the other improving the quality of plants and animals progress in method of human hygiene and to solve problems which takes place due to scarcity of food. It has helped in the enlargement of a new line of treatment known as Hybridoma which aims to take care of cancer. It has also enlarged the yield of several industrial products like alcohols, acids, enzymes, antibiotics, vaccines, hormones etc. ...read more.

According to an industry trade association, genetically U.S. farmers include corn, canola, rice, tomatoes, potatoes and soybeans. Other genetically engineered food crops such as sugar, bears, wheat, papayas, berries, bananas and pineapples have been developed in laboratories. Therefore, because of the use of the biotechnology food can be produced wherever man wants SOME BENEFITS OF BIOTECHNOLOGY The first genetically engineered products were medicines designed to combat human diseases. Insulin used to cure diabetes and blood clot reducing enzymes for heart attack victims are now produced simply and inexpensively as a result of biotechnology. In agriculture, first generation biotechnology products offer indirect benefits for customers and the environment through lower agricultural chemical usage. However, Biotechnology is completely safe for the use of mankind and can help human being in ways as explained in the above paragraphs such as in the production of food, biotechnology in the fields of agriculture, medicine and industry and some benefits of it, which proves that in today's world biotechnology has done an enough progress to satisfy human being but the inventions will take place in biotechnology in this modern world. Prepared by: VIDHI SHAH ...read more.