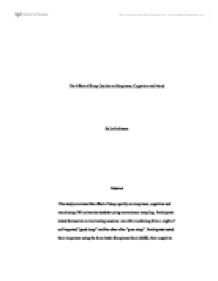 This study examined the effect of sleep quality on sleepiness, cognition and mood using 100 university students using convenience sampling. Participants tested themselves in two testing sessions: one after awakening from a night of self-reported “good sleep” and the other after “poor sleep”. Participants tested their sleepiness using the Karolinska Sleepiness Scale (KSS), their cognitive performance with a Trail Making Task (TMT) and a Digit Symbol Substitution Task (DSST), and their mood using the Positive and Negative Affect Scale (PANAS). The results supported the hypotheses that sleepiness would be lower, cognitive functioning would be higher, and mood would be more positive and less negative following a good night’s sleep than a poor night’s sleep. This study highlights the importance of a good night’s sleep to maintain good mood and cognitive functioning.

Research has consistently found the sleep loss depresses cognitive functioning and mood. A comprehensive review suggests this is due to sleep loss affecting hippocampal areas (Meerlo, Mistlberge, Jacobs, Heller, & McGinty, 2009). Dinges et al. (1997) subjected 16 participants to seven consecutive nights of 33% reduction in normal sleep time, and found that mood and cognitive performance progressively declined. Mood was measured using the Profile of Mood States (POMS), while cognition was measured using a psychomotor vigiliance task (PVT), a probed recall memory (PRM) task, and a serial-addition (SAD) task, all of which are commonly used tests. Blagrove and Akehurst (2001) found similar results. Pilcher and Huffcutt’s meta-analysis (1996) concluded that a median sleep-deprived individual performs at approximately the same standard as a 9th percentile non-deprived individual, when performance is considered as an average of mood state, motor functioning and cognitive performance.

In a review on the relationship between sleep and stress, studies on humans and rodents have dfound that sleep deprivation can affect mood by causing temporary increases in activity of neuroendocrine stress systems, such as the hypothalamic-pituitaryadrenal axis and the autonomic sympatho-adrenal system (Meerlo, Sgoifo, & Suchecki, 2008). Animal studies found changes to neuroendocrine systems similar to those seen in stress-related disorders (such as depression) in humans, and therefore suggest that insufficient sleep might predispose people to stress-related disorders (Meerlo et al., 2008). The negative effects of sleep deprivation on mood have also been shown with house officers following night duty (Orton & Gruzeller, 1989), train drivers (Torsvall & Akerstedt, 1987) and doctors doing residency training (Bartle, Sun, & Thompson, 1988).

There is more to sleep quality than measuring sleep deprivation. Van Dongen, Maislin and Dinges (2003) and Drake et al. (2001) found that the detrimental effects of sleep loss vary as a function of rate of sleep loss.   Van Dongen et al. (2003) found that participants restricted to six hours of sleep for 14 days had working memory performance (as measured by a digit symbol substitution task performance like the current study) similar to participants deprived completely of one night’s sleep. Restriction of sleep to 4 hours reduced working memory performance  to levels similar to those after 2 nights of complete sleep deprivation. Van Dongen et al. (2003) suggested that reduction in performance is due to time spent awake in excess of a usual wakefulness period.

Knowledge concerning consequences of chronic partial sleep deprivation, as it occurs in real life, is incomplete (Meerlo et al., 2008; Pilcher & Huffcutt, 1996). The aim of the present study is to investigate the impact of reduced quality of sleep on sleepiness, cognitive performance and mood. This study extends sleep deprivation studies by focusing on sleep quality as the independent variable, which is affected by factors other than restricted sleep. The study endeavors to increase awareness of the importance of sleep, in particular by highlighting how detrimental poor quality sleep can be, by demonstrating the negative impacts of reduced sleep quality.

The Karolinska Sleepiness Scale (KSS). The KSS is a nine-point subjective sleepiness scale (Akerstedt & Gillberg,1990). Each point is defined: 1 = extremely alert, 2 = very alert, 3 = alert, 4 = rather alert, 5 = neither alert nor sleepy, 6 = some signs of sleepiness, 7 = sleepy, but no problem staying awake, 8 = sleepy, some effort to stay awake, 9 = very sleepy, great effort to keep awake. Sleepiness as self-rated by the KSS increases with restricted sleep, and is valid and reliable (Axelsson et al., 2008).

The Positive and Negative Effect Scale (PANAS). The PANAS consists of two 10-item mood scales. Briefly, Positive Affect (PA) measures how much a person feels enthusiastic, active, and pleasurably engaged, with low scores indicating sadness and lethargy. Negative Affect (NA) measures subjective distress and negative mood states such as anger, disgust, contempt, guilt and nervousness, with low scores suggesting calmness and serenity (Watson, Clark, & Tellegen, 1988). Participants rate each item on a scale from 1 to 5, based on the strength of the emotion. The PANAS is valid and reliable (Thompson, 2007; Watson et al., 1988).

A Trail Making task (TMT). The TMT is a test of attention, abstraction and cognitive flexibility (Malloy, Cohen, Jenkins, & Paul, 2006). There are commonly two parts to the TMT, but only part B was used in this study. Part B requires participants to draw lines serially connecting 24 encircled numbers and letters randomly dispersed on a piece of paper. Participants must alternate between numbers and letters (e.g., 1, A, 2, B, 3, C, etc.). The time taken to complete the task and number of errors made is recorded.   The TMT is valid and reliable (Strauss, Sherman, & Spreen, 2006).

A Digit Symbol Substitution Task (DSST). The Digit Symbol Substitution Test (DSST) is adapted from the DSST contained in the Weschler Adult Intelligence Scale Revised (WAIS-R) (“Weschler Adult Intelligence Scale”, 2010). The DSST gives a table of nine digit-symbol pairs (e.g. 1/ξ, 2/α…9/φ). Participants must write symbols corresponding to a list of digits as accurately and quickly as possible. Usually, a participant’s score is the number of correct symbols substituted within a time limit (Lezak, Howieson, & Loring, 2004). In this study, participants completed the entire task and the time taken and number of errors were recorded.

Scores on the DSST are determined mainly by attention, and also by psychomotor speed (Joy, Fein, Kaplan, & Freedman, 2000). It is valid and reliable (Lezak et al., 2004; Strauss et al., 2006; Matarazzo, Herman, & David, 1984). It is free from practice effects (McCaffrey, Ortega, & Haase, 1993). Learning which digits correspond to which symbols is not a significant factor in performance (Kreiner & Ryan, 2001). In addition, the DSST is particularly sensitive to changes in cognition when cognitive performance is high (Proust-Lima, Amieva, Dartigues, & Jacqmin-Gadda, 2006), which is ideal for this experiment as changes to cognition after sleep deprivation are being investigated in university undergraduates who are likely to display high cognitive performance.

The experiment had a single factor, repeated measures design. The independent variable was the quality of sleep, and consisted of two levels: good and poor. The dependent variables were sleepiness (KSS), cognition (TMT and DSST) and mood (PANAS). The order of testing was counterbalanced to control for order effects.

Participants tested themselves on their sleepiness, cognitive performance and mood as per test instructions in two testing sessions: one after awakening from a night of self-reported “good sleep” and the other after a night of “poor sleep”. Each participant chose a night of good and poor sleep for testing from a two-week period, separated by a few days. It did not matter which order the participants experienced his/her good and poor night’s sleep. It took approximately 20 minutes for participants to self-administer all tests for each of the two conditions. Tests were performed approximately 30 minutes after awakening.

The raw data were analysed by performing repeated measures t-tests using SPSS, version 17.0. The SPSS output appears in the Appendix. There were no violations of assumptions. The means and standard deviations for tasks performed after good or poor sleep are presented in Table 1. An alpha level of .05 was used for all statistical tests.

Table 1
Cognition, Mood and Sleepiness as a Function of Good or Poor Quality Sleep

The observation that sleepiness was lower after a good night’s sleep compared to a poor night’s sleep is consistent with the findings of Akerstedt and Gillberg (1990). That mood was negatively affected by poor quality sleep was consistent with Dinges et al.’s (1997) finding of worsened mood after a 33% reduction in normal sleep time. The relatively poor cognitive performance following a poor night’s sleep is similar to Van Dongen et al.’s (2003) finding that the chronic restriction of sleep to 6 or 4 hours a night steadily reduced cognition as measured by a digit symbol substitution task.

The feature of this study that separates it from many similar studies is that sleep quality was the independent variable rather than sleep quantity. Sleep quality has been found to be better related than sleep quantity to health, negative mood and sleepiness (Pilcher, Ginter, & Sadowsky, 1997). The sleep quality scale in this experiment had only two levels, so the rate of cognitive and mood decline with sleep quality decline was not able to be investigated. In addition, there was undoubtedly individual variation in the quality of ‘good’ nights and ‘poor’ nights of sleep. Thus, while the general affect of sleep quality on sleepiness, cognition and mood could be examined, the size of the effect could not be measured. Another limitation was that people were aware of what the study was measuring, and thus the results may lack objectivity due to expectancy effects.

To improve this experiment, the time of administration of cognitive tests could be more tightly controlled, as the severity of cognitive impairment relates to time elapsed after awakening. Wertz, Ronda, Czeisler and Wright (2006) compared the impact of sleep deprivation and sleep inertia (a feeling of impaired cognition and grogginess upon awakening) on cognition. Cognitive performance was measured repeatedly during the period of sleep deprivation, and was found to be poorer when testing was done immediately after wakening.

Although the effects of sleep deprivation on cognitive performance are more pronounced as the novelty of the task decreases (Kjellberg, 1977), more complex cognitive tasks could have been used because they are more relevant to real-world situations. Harrison and Horne’s (2000) review suggests that complex tasks that are interesting to the participant but do not involve divergent skills such as visual temporal memory and confidence judgement are largely insensitive to sleep deprivation.

To ensure that the changes to mood and cognition were caused by changes in sleep quality, the sample of participants could have been selected in such a way as to ensure that a range of personalities was represented. Changes to mood and cognition following sleep deprivation may not be due to sleep loss alone. In Blagrove and Akehurst’s (2001) study, lowered mood was experienced following sleep deprivation, but personality also had an effect on mood - people with internal or extreme external loci of control had less dramatic mood deficits after sleep deprivation than other participants. In Taylor and McFatten’s (2003) study, extraverts had poorer performance in cognitive tasks after sleep deprivation than introverts.

That PANAS scores indicated more negative emotions after a poor night’s sleep highlights the importance of sleep for psychological health. In addition, the decline in cognitive functioning following poor sleep has obvious implications for everyday aspects of our lives such as work performance. The results should encourage health professionals who receive complaints from clients of poor mood and/or cognitive functioning to assess clients’ sleep quality, in order to ascertain whether sleep patterns are having a significant effect.  By adding to the literature concerning the negative effects of poor sleep quality, this study further supports the importance of a good night’s sleep for maintaining good mood and cognitive functioning.

Thompson, E.R. 2007. Development and validation of an internationally reliable short-form of the positive and negative affect schedule (PANAS). Journal of Cross-Cultural Psychology, 28, 227-242.

Watson D., Clark L.A., & Tellegen, A. 1988. Development and validation of brief measures of positive and negative affect: the PANAS scales. Journal of Personality and Social Psychology, 54, 1063-1070.