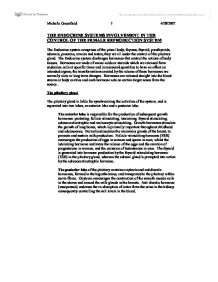 The Endocrine systems involvement in the control of the female reproductive system.

THE ENDOCRINE SYSTEMS INVOLVEMENT IN THE CONTROL OF THE FEMALE REPRODUCTION SYSTEM The Endocrine system comprises of the pineal body, thymus, thyroid, parathyroids, adrenals, pancreas, ovaries and testes; they are all under the control of the pituitary gland. The Endocrine system discharges hormones that control the actions of body tissues. Hormones are made of amino acids or steroids which are released from endocrine cells at specific times and in measured quantities to have an effect on intended organs; the transformations created by the release of these hormones are normally slow or long-term changes. Hormones are released straight into the blood stream or body cavities and each hormone acts on certain target zones from the source. The pituitary gland The pituitary gland is liable for synchronizing the activities of the system, and is separated into two lobes, an anterior lobe and a posterior lobe. The anterior lobe is responsible for the production of subsequent growth hormones: probating, follicle stimulating, luteinizing, thyroid stimulating, adrenocorticotrophic and melanocyte stimulating. Growth hormones stimulate the growth of long bones, which is primarily important throughout childhood and adolescence. Prolactin stimulates the mammary glands of the breast, to promote and sustain milk production. ...read more.

During adolescence, increased hormonal activity involving the reproductive system as well as other endocrine organs results in the characteristic physical changes of puberty, which include breast enlargement, growth of pubic hair and the redistribution of body fat. From around the age of 12 until around 50, the reproductive organs together with the endocrine system normally prepares a women's body for a potential pregnancy each month. If conception occurs (sexual intercourse), the reproductive system will maintain the pregnancy for an average of 38 weeks, culminating in the birth of the baby. If conception does not occur, the uterus lining prepared for an embryo is discharged during the period of the monthly bleeding (menstruation). The menstrual cycle takes place over a 28-day period: * Days 1 - 6: Menstruation - the endometrium (lining of the uterus) stops working and is discharged. * Days 7 - 13: Proliferative phase - replenishment of the endometrium takes place. * Day 14: Ovulation - the ovum is released into the fallopian tube by the ovary. * Days 15 - 28: Secretary phase - after ovulation, the ovum moves along the fallopian tube to the uterus, the lining of which has been thickened by hormones in preparation for a fertilized ovum. ...read more.

Pregnancy Pregnancy is the time between conception and birth. For the first two months the developing baby is called an embryo. After this, once the baby's organs are working, it is called a foetus. Amino acids surround and protect the foetus. The placenta keeps the baby alive and is attached to the uterus. Inside the placenta, food and oxygen pass from the mother's blood to the foetus, and waste passes in the opposite direction. The umbilical cord carries blood between the placenta and the foetus. Birth At about 38 weeks after fertilization, the uterus starts to contract. This process is called labour and usually takes place 12 hours before the birth (but it can differ with each woman). Powerful contractions push the baby out through the vagina, and the baby takes it's first breath of air. If the baby is a girl, (as I have already mentioned in this report) at birth her ovaries will contain 400,000 follicles, each one will be made up of a collection of cells with an immature egg in its centre. She will be on her way to reproduce life - just as she has been reproduced. Conclusion Reproduction ensures that the human species does not become extinct. The male and female reproductive systems enable men and women to have children. ...read more.