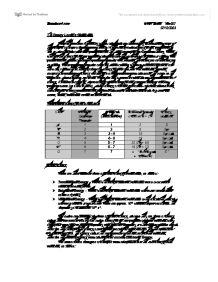 The Energy Levels of Molecules

The Energy Levels of Molecules The phenomena of chemistry cannot be understood thoroughly without a firm grasp of the principle concept of quantum mechanics. When talking about energy levels, quantisation has to be considered, and this quantisation is the basic assumption of Quantum theory. This is when all the energy levels are quantised meaning that they can have only discrete values. This quantisation is defined through a quantum number, which usually have integers or half integers as values. These quantum numbers can only be fixed values whereas a classical particle can have any value when changing from one energy level to another. The molecule normally accepts one quantum of energy and the size of this quantum must be exactly the same as the difference between these two levels. Therefore this statement describes us the quantisation of energy. An element can only be present in certain energy levels corresponding to various quantum states (as shown below), but the energy of an electron cannot be found between any shown levels. Energy quantisation is universal because it holds for all kinds of systems like atoms, nuclei, molecules or electrons in solids. The principle energy levels of electrons Shell Principle Quantum Number Period (horizontal row) Maximum Number of Electrons = 2n2 Energy sublevels K 1 1 2 S L 2 2 8 S p M 3 3 - 4 18 S p d N 4 4 - 6 32 S p d f O 5 5 - 7 32 (2n2 = 50) ...read more.

From this equation the only unknown is I (moment of inertia / kg m2), but this can also be calculated by the following: I = m1m2 ? (r)2 Where m = mass (kg) m1 +m2 r = bond length (m) Now the Rotational energy can be calculated. Note that in this case the lowest energy state corresponds to the lowest rotational quantum number, which in this case is zero so therefore the molecule can have zero rotational energy. Vibrational Energy The Vibrational energy can also be calculated from the following equation: EV = (V + 1/2)h wosc Where V = Vibrational quantum number (0, 1, 2, 3, 4 etc. and not In between values, and no values less than 0) wosc = Oscillation frequency of molecule Where wosc = 2 ?? Where ? = frequency (Hz) ? = 1 k Where k = constant 2? � � = reduced mass = m1m2 m1 + m2 wosc could also be calculated by the following providing that the values are known: wosc = k Where k = constant � � = reduced mass (as shown previously) Therefore when a molecule moves from Level 0 to Level 1: For level 0 : EV=0 = 1/2 h wosc This value is commonly known as the vibrational zero point. But when the vibrational quantum number equals 1, the corresponding energy is: For Level 1 : EV=1 = 3/2 h wosc The change in energy would therefore be ...read more.