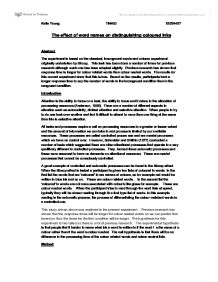 The experiment is based on the classical, incongruent words and colours experiment originally undertaken by Stroop. The effect of word names on distinguishing coloured inks

The effect of word names on distinguishing coloured inks Abstract The experiment is based on the classical, incongruent words and colours experiment originally undertaken by Stroop. This task has been done a number of times for previous research although each one has been adapted slightly. Previous research has shown that response time is longer for colour related words than colour neutral words. The results for this current experiment show that this is true. Based on the results, participants took a longer response time to say the number of words in the incongruent condition than in the congruent condition. Introduction Attention is the ability to focus on a task, the ability to focus and it refers to the allocation of processing resources (Anderson, 1995). There are a number of different aspects to attention such as automaticity, divided attention and selective attention. When people to try to do one task over another and find it difficult to attend to more than one thing at the same time this is selective attention. All tasks and processes require a call on processing resources to a greater or lesser extent and the amount of information we can take in and process is limited by our available resources. ...read more.

The same instructions were given to all participants and they were not given the chance to confer with each other before the test. Participants Twenty people took part in the test. Sixteen of which were recruited from colleagues at the Open University or friends and family. The other four participants were selected by the author and were friends. The age of the participants varied between eighteen and sixty nine and was a mix of thirteen women and seven males. Materials Two lists of thirty words were prepared on A4 sheets. One list contains words such as plum, blood and lemon and the other contained colour neutral words such as blame, ledge and grade. Each word was printed in one of six colours: red, orange, yellow, blue, green or purple. The same ink colour sequence was used for lists. All words were printed in the same font and were the same size. Examples of the word lists are shown in Appendix 1. Also used was a stopwatch to time the responses. Standard instructions were also given to the participants (Appendix 2) and a consent form was completed by each participant before they underwent the task (Appendix 3). ...read more.

Discussion The results showed a significant difference in the time taken to read the colour related words over the colour neutral words. This is in line with previous research which has been undertaken and supports the experimental hypothesis of this study. This study was done on a small scale with only twenty participants. In the study when naming the colours on the first condition, a number of participants named the word rather than the ink colour and spent a number of seconds correcting themselves. This in itself had an effect on the results. For further research the number of mistakes could be measured and tested. Also some of the participants seemed to slow down when reading colour words and tried to pay more attention to the task. Further research on this subject could try to find out whether automatic processing can deal with even more complex inputs. That is to see if the automatic processer can process information at a deeper level than surface level. The limited capacity theory is supported by the Stroop experiment because it shows that's the capacity of attention is limited by doing two things at the same time, i.e. seeing the word and saying the colour of the ink the word is written in. Knowledge of the word interferes with the process. ...read more.