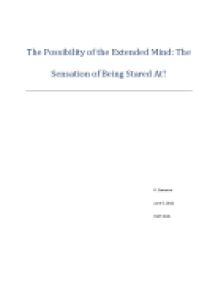 The Extended Mind: Can We Sense When Someone is Staring?

﻿The Possibility of the Extended Mind: The Sensation of Being Stared At? ________________ K. Cameron June 5, 2012 RLST 2326 The extended mind is a concept that is becoming increasingly popular among many different disciplines to determine the separation point of the mind and the surrounding environment. A well-known man, Rupert Sheldrake, is particularly interested in the concept of the extended mind and has written many books, articles and papers expressing his experiments. In Rupert Sheldrake?s Seven Experiments That Could Change the World: A Do-It-Yourself Guide to Revolutionary Science, there are multiple reasons why Sheldrake believes that the mind extends into the environment in which he explains using brain and heart metaphors as well as ancient religious and general beliefs from around the world. Sheldrake (2002, 100) describes the exhibit in the Natural History Museum in London as the brain being ?the cockpit of a modern jet plane, with banks of dials and computerized flight controls? as well as the ?two empty seats? representing the left and right hemispheres of the brain. Sheldrake then goes on to explain traditional peoples as well as the Tibetans beliefs of the heart as ?more than a center of emotion, love and compassion: [but being] a center of thought and imagination? (Sheldrake, 2002, 102). ...read more.

Another example of a rational explanation was by David A. Marks when his eight-year-old son Michael felt like he was being stared at while walking in their neighborhood. Marks had then ?asked Michael how he knew that unless he had already been staring at them? in which he realized the truth and became less disturbed. The paper mentioned that this was also what Titchener ?attributed to the cause of the feeling of being stared at to the staree, not the starer, and so the attribution of causality to the starer is false, a misinterpretation? (Colwell and Marks, 2000). Sheldrake?s investigations consisted of two types of experiments; a feedback experiment where they find out whether or not they were right about thinking they were being stared at immediately or the second experiment where no feedback was given back. Many people replicated these experiments using different people and slightly different time intervals. Robert A. Baker used methods similar to those of Sheldrake?s. Baker wrote an article in response to Sheldrake?s methods and the reasons why he did not believe that they proved the extended mind. Sheldrake then wrote a review against Baker?s procedures and results. In Baker?s second experiment, he decided to have 20- one minute intervals, in which five of the randomized minutes would be when the experimenter stared at the subject and the other 15 minutes would be when the experimenter concentrated on a completely different topic. ...read more.

With all of this information, I feel that it is easy to go through the work of another and pinpoint every little thing that could possibly be wrong or done differently to prove something else. I feel that this is a very biased topic and it is hard to prove one side of the story to a person from the other side and vice versa. For this topic, or concept rather, the scientist, philosopher, psychologist, etcetera, has to be open minded and not have a view before doing any research or investigations. Sheldrake repeated throughout a few of his articles that he felt Marks, Baker and Colwell were more doing experiments to prove it didn?t exist rather than trying to find the truth, while Sheldrake is so convinced that staring is in fact felt, it is hard for Sheldrake to see any scientific knowledge as to why people are so skeptical of the concept. With all the new technology and concepts in the world today, it may be that the extended mind can be proved, but as of this day in time, I feel that it does not exist, but is rather the off-chance that you just happened to be looking around and made eye contact with someone who saw you moving in their peripheral vision and Sheldrake?s methods are hard to tell if they are valid. ...read more.