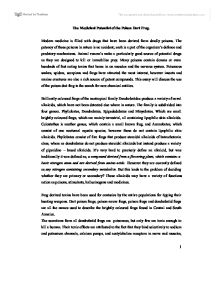 The Medicinal Potential of the Poison Dart Frog.

The Medicinal Potential of the Poison Dart Frog. Modern medicine is filled with drugs that have been derived from deadly poisons. The potency of these poisons in nature is no accident; each is a part of the organism's defence and predatory mechanisms. Animal venom's make a particularly good source of potential drugs as they are designed to kill or immobilise prey. Many poisons contain dozens or even hundreds of fast acting toxins that home in on muscles and the nervous system. Poisonous snakes, spiders, scorpions and frogs have attracted the most interest, however insects and marine creatures are also a rich source of potent compounds. This essay will discuss the use of the poison dart frog in the search for new chemical entities. Brilliantly coloured frogs of the neotropical family Dendrobatidae produce a variety of novel alkaloids, which have not been detected else where in nature. The family is subdivided into four genera. Phyllobates, Dendrobates, Epipededobates and Minyobates. Which are small brightly coloured frogs, which are mainly terrestrial, all containing lipophilic skin alkaloids. Colostethus is another genus, which contain a small brown frog, and Aromabates, which consist of one nocturnal aquatic species, however these do not contain lipophilic skin alkaloids. Phyllobates consist of five frogs that produce steroidal alkaloids of batrachotoxin class, where as dendrobates do not produce steroidal alkaloids but instead produce a variety of piperidine - based alkaloids. It's very hard to precisely define an alkaloid, but was traditionally it was defined as; a compound derived from a flowering plant, which contains a basic nitrogen atom and are derived from amino acids. However they are currently defined as any nitrogen containing secondary metabolite. ...read more.

The subsequent block in transmitter release appears to be due to complete depolarisation of the nerve terminal. The effect of batrachotoxin can be prevented by tetrodotoxin, a compound that blocks passive diffusion of sodium ions through excitable membranes. The initial muscle contracture caused by batrachotoxin results from muscle depolarisation elicited by an increase in sodium permeability in the muscle membranes, while subsequent sustained contracture appear to be due to release of calcium ions from an osmotically disrupted sarcotubular system. Batrachotoxins have no effect on cells, which do not posses voltage sensitive sodium channels. They are strong cardio toxins, affecting ion permeability, thus leading to irreversible depolarisation of nerves and muscles, arrhythmias, fibrillation, and cardiac failure. Their irreversibility is due to the lipophilic nature of the compound. Larger animals are often more susceptible to toxins than smaller organisms. The oral potency of batrachotoxin is much lower; therefore native Indians are able to eat animals captured by their darts without risk of intoxication. In additions, the small amount of poison used is metabolised and the metabolites are not poisonous; cooking may also destroy toxins but not all toxins will be heat labile. Results from studies have demonstrated that batrachotoxin is an extremely important tool for the study of events in muscle, nerve and synapse. Pumiliotoxins (positive modulators of sodium channels) occur in all species of Phyllobates and Dendrobates, over 100 toxins have been placed in this group. Despite the numerous toxins in this group, much is still unknown about this group of toxins. Divided into three groups, Pumiliotoxins A and B are significantly more toxic than the C group. It appears that this group of toxins affect the transport of calcium ions in the calcium and sodium dependent processes within nerve and skeletal muscles (Myers and Daly 1983; Patocka et al. ...read more.

Being used by a plants or animals for it survival in the natural world. However with countless numbers of organisms still waiting to be discovered, deep down in the oceans or in tropical rain forest. The possibilities of discovering them are evaporating with each passing day. Tropical rain forests are being destroyed by miles, on a daily basis leading to a direct change in the ecosystem and the habitat of thousands of species of animals. Placing greater evolutionary pressures on them. Increasing sea temperatures, may initiate the loss of a species or even the being of entire organisms. This has been seen earlier, with dendrobatid frogs bread in captivity soon loss their toxins or produce considerably less. Environmental or dietary precursors in their natural environment may play an equal role in the synthesis of potential pharmacological active compounds present in organisms; with out one you may have none. It would appear that amphibians, in their effort to evolve chemical defences against predators, have provided a rich source of novel biologically active compounds not present elsewhere. In view of the still large number of amphibians, which have not been investigated, it seems likely that further classes of pharmacologically active compounds will be obtained from this natural source. If all of the frog alkaloids are sequestered from dietary sources, then small, even tiny arthropods may be a virtually untapped source of new pharmacologically active agents from the world's rain forest. The unique pharmacological activities and therapeutic potential of frog alkaloids such as batrachotoxins, pumiliotoxins, histrionicotoxins and gephyrotoxins have provided a rich source of possible leads in the further development of potential medicines. Agents that have selective effects n membrane permeability should find wide application in studies of nerve, muscle, and synapse. Providing essential information required by pharmacologist to enable them to produce fast acting specific medicines. Appendix. Fig 1. ...read more.