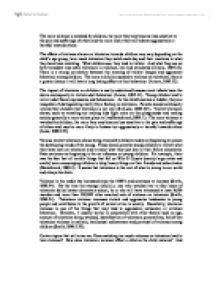 The more violence is watched by children, the more they may become less sensitive to the pain and sufferings of others and the more likely they will behave aggressively or harmful towards others.

They establish viewing patterns that will expose them to high levels of violent content throughout childhood. And these patterns can persist into and through elementary (Josephson, 1995:15). Pre-schoolers (children 3 to 5 years of age) have relatively strong effects of television violence for both girls and boys in this age group because pre-schoolers demonstrate a strong tendency to focus on the most physically obvious features of their environment (Josephson, 1995:17). Although they only watch television, about half the time the set is on to watch the important attention getters on screen. During the time they are not watching, they appear to be listening and will frequently turn their visual attention back to the screen in response to an obvious feature, such as loud music or sound affects (Josephson, 1995:18). A pre-schoolers attraction to television violence are predisposed to seek out and pay attention to televised violence because such violence is accompanied by formal features, such as loud music, rapid movement, rapid scene changes and sound effects that may attract their attention (Josephson, 1995:18). The child easily learns this type of violent attraction with loud music and bright and rapid movements. In addition the child is less likely to pick up on more subtle information like negative motivations, punishing consequences that occur at another point in time, and the sufferings of the victims which makes it unlikely that they will put the violence in context (Josephson, 1995:19). This means that the children are only attracted to the rapid movements that are easily learned than the images and morals being taught throughout the program. Since the programs that are being viewed by pre-schoolers are mostly cartoons, it can be argued that television violence is relatively harmless because they know that is just fantasy (Josephson, 1995:20). Knowing that television content is fantasy does make a difference in the behaviour and emotions of children. Studies show that when the effects of live-action violence and cartoon violence are compared, it was evident that the live-action violence had a substantially larger effect on aggressive behaviour than the carton violence (Josephson, 1995:21). ...read more.

The effect of television violence leads "at-risk" children to be even more aggressive than they would otherwise be, and although the group at risk might be a minority of viewers, they are more likely to be the majority of aggressors. Effects on Children Until the age of 3 or 4, children are not able to tell the difference between fantasy and reality in television programs. Young children tend to copy what they see on television or videogames. This may have a negative effect on their behavior. In fact, a large number of studies have found a relationship between televised violence and aggressive behavior in children. Some of the other effects that are associated with repeated viewing of television and videogame violence include: desensitization. Children may become less sensitive to the pain and suffering of others, and how they view life and its values may be negated. Acceptance of violence. Children may come to accept violence as both a societal norm and as an acceptable way to solve small and large conflicts. Fearfulness. Children who watch a lot of television may feel that the world is a dangerous place and it may increase their fear about becoming a victim of violence. Today, American children watch an average of three to four hours of television daily, which averages out to be twenty-eight hours per week. Many people may not be aware of how powerful an influence Television is on developing values and forming behavioral patterns in children?�s lives. Sadly, much of today?�s television programs are violent. Children age eight and under are effected the most by these acts of violence seen on TV daily. This age is very crucial in a child?�s development; they are learning social behavior that will stay with them throughout their lives. At this age, small children have trouble distinguishing between fantasy and reality. Studies have shown that here is when they begin to form their beliefs about aggression. These TV shows are sending the message to children across America that yes, violence is acceptable and that no one is willing to stop it. ...read more.