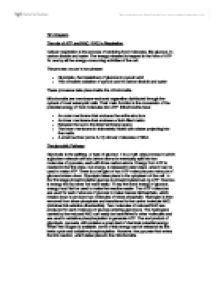 The role of ATP and NAD / FAD in Respiration.

Tim Grayson The role of ATP and NAD / FAD in Respiration Cellular respiration is the process of oxidizing food molecules, like glucose, to carbon dioxide and water. The energy released is trapped in the form of ATP for use by all the energy-consuming activities of the cell. The process occurs in two phases: * Glycolysis, the breakdown of glucose to pyruvic acid * The complete oxidation of pyruvic acid to carbon dioxide and water These processes take place inside the mitochondria. Mitochondria are membrane-enclosed organelles distributed through the cytosol of most eukaryotic cells. Their main function is the conversion of the potential energy of food molecules into ATP. Mitochondria have: * An outer membrane that encloses the entire structure * An inner membrane that encloses a fluid-filled matrix * Between the two is the intermembrane space * The inner membrane is elaborately folded with cristae projecting into the matrix. ...read more.

Two molecules of reduced NAD are produced for each molecule of glucose entering glycolysis. The hydrogens carried by the reduced NAD can easily be transferred to other molecules and are used in oxidative phosphorylation to generate ATP. The end product of glycolysis, pyruvate, still contains a great deal of chemical potential energy. When free oxygen is available, some of this energy can be released via the krebs cycle and oxidative phosphorylation. However, the pyruvate first enters the link reaction, which takes place in the mitochondria. The Link Reaction In aerobic respiration, each pyruvate molecule is decarboxylated (co2 removed), the remaining two-carbon molecule (ethanoyl or acetyl group) react with reduced Coenzyme A, and at the same time one NADH+ and HADH+ is formed. This is known as the link reaction. Coenzyme A is a complex molecule of a nucleotide (adenine + ribose) with a vitamin (pantothenic acid), and acts as a carrier of acetyl groups to the krebs cycle. ...read more.

For each acetyl group that enters the Krebs cycle, three molecules of NAD+ are reduced to NADH. In Step 6, electrons are transferred to the electron acceptor FAD rather than to NAD+. In one turn of the citric acid cycle, two molecules of carbon dioxide and eight hydrogen atoms are removed, forming three NADH and one FADH2. The carbon dioxide produced accounts for the two carbon atoms of the acetyl group that entered the citric acid cycle. Because two acetyl CoenzymeA molecules are produced from each glucose molecule, the cycle must turn twice to process each glucose. At the end of each turn of the cycle, the four-carbon oxaloacetate is left, and the cycle is ready for another turn. After two turns of the cycle, the original glucose molecule has lost all of its carbons and may be regarded as having been completely consumed. Only one molecule of ATP is produced directly by a substrate-level phosphorylation with each turn of the ciric acid cycle. The rest of the ATP that is formed during aerobic respiration is produced by the electron transport system and chemiosmosis. ...read more.