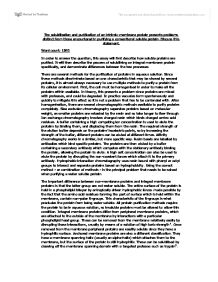 The solubilisation and purification of an intrinsic membrane protein presents problems distinct from those encountered in purifying a conventional soluble protein. Discuss this statement.

The solubilisation and purification of an intrinsic membrane protein presents problems distinct from those encountered in purifying a conventional soluble protein. Discuss this statement. Word count: 1860 In order to answer the question, this essay will first describe how soluble proteins are purified. It will then describe the process of solubilising an integral membrane protein specifically, and demonstrate differences between the two processes. There are several methods for the purification of proteins in aqueous solution. Since these methods discriminate based on one characteristic that may be shared by several proteins, it is almost always necessary to use multiple methods to purify a protein from its cellular environment. First, the cell must be homogenised in order to make all the proteins within available. In theory, this presents a problem since proteins are mixed with proteases, and could be degraded. In practice vacuoles form spontaneously and quickly to mitigate this effect so it is not a problem that has to be contended with. After homogenisation, there are several chromatographic methods available to purify proteins completely. Size exclusion chromatography separates proteins based on molecular weight, as smaller proteins are retarded by the resin and so take longer to flow through. Ion exchange chromatography involves charged resin which binds charged amino acid residues. A buffer containing a high competing ion concentration is used to elute the proteins by binding them, and displacing them from the resin. ...read more.

Figure 2 - a membrane protein solubilised by detergent molecules. Detergents can be split into three types, according to the characteristics of the head group which can be either ionic, non-ionic or zwitterionic. Ionic (harsh) detergents in turn can be split into two types - anionic or cationic - depending on the charge of the ion which is covalently attached to the hydrophobic group. As the name suggests, they have formally charged head groups. Anionic detergents are the most common, and often take the form of a sodium salt. This class of detergents tends to denature the protein by disrupting non-covalent tertiary and quaternary structure interactions as well as it disrupts protein-lipid interactions, because of its very strong solubilising effect. However this disadvantage is not ubiquitous, nor does it vary significantly between anionic and cationic detergents. Rather, it varies between individual detergents of both groups. For example, both sodium dodecyl sulphate (SDS) and sodium cholate are anionic, since the sodium dissociates in solution leaving a negatively charged head group (sulphate and carboxyl groups respectively). Sodium cholate is commonly used to solubilise proteins for purification4, whereas SDS has a denaturing effect that precludes its use for this purpose but makes it very useful for preparing proteins for gel electropheresis. Non-ionic (mild) detergents have no formal charge, but are polar and interact with water by hydrogen bonding. They are the most common class of detergents used in purification, though not necessarily of integral membrane proteins. ...read more.

Because the detergent only needs to be removed to below the critical micelle concentration rather than absolutely, diffusion without any extra energy applied is sufficient. Ion exchange chromatography can remove zwitterionic and ionic detergents, but the ionic strength of elution buffer and resin type required must be determined experimentally. Upon the removal of the detergents, the hydrophobic protein will precipitate out of solution. In such a form, proteins are inactive. In order to restore activity they must be inserted into a simulation of their environment. If phospholipids are added to the solution, a cell membrane-like bilayer called a liposome will form. The protein will associate with this in the same way as it would a cell membrane. Phospholipids vary in terms of head groups bound to the phosphate group, and alkyl chain saturation and length. Some proteins interact with specific phospholipids as a requisite to activity, which means these phospholipids must be added. This characteristic of proteins is determined experimentally. The restoration of activity is necessary for study of a protein's function, but not necessarily for other studies (eg. its structure.) In conclusion, there are many problems specific to purifying integral membrane proteins. These problems all stem from the fact that detergents must be used to solubilise the protein before purification. The primary problem, therefore, is the removal of the protein from the membrane by detergent and includes selecting a detergent which is capable of solubilising the protein but is not a denaturing agent. Secondary problems are encountered in size exclusion, ion exchange and hydrophobicity chromatography when trying to purify the protein in the presence of detergent. ...read more.