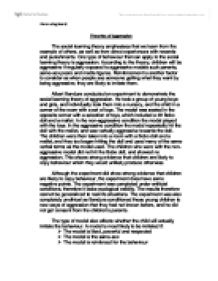 Theories of Aggression The social learning theory emphasises that we learn from the example of others, as well as from direct experiences with rewards and punishments. One type of behaviour that can apply to the social learning theory is aggression. According to the theory, children will be aggressive if regularly exposed to aggressive models such parents, same-sex peers and media figures. Reinforcement is another factor to consider as when people see someone getting what they want by being aggressive; they are likely to imitate them. Albert Bandura conducted an experiment to demonstrate the social learning theory of aggression. He took a group of young boys and girls, and individually took them into a nursery, and the child in a corner of the room with a set of toys. The model was seated in the opposite corner with a selection of toys, which included a 5ft Bobo doll and a mallet. In the non-aggressive condition the model played with the toys. ...read more.

The type of model also affects whether the child will actually imitate the behaviour. A model is most likely to be imitated if: > The model is liked, powerful and respected > The model is the same-sex > The model is reinforced for the behaviour > The individual thinks they are capable of performing the actions Therefore, if a child sees a stranger committing a violent crime for example, they would not imitate the man. However if they see there father or a respected famous person they look up to committing a similar crime they are more likely to imitate the person. Although organizations such as the American Academy of Pediatrics and the American Psychological Association have suggested that thousands (3500 according to the AAP) of studies have been conducted confirming this link, others have argued that this information is incorrect. ...read more.

This does not always happen is poor areas as you may expect, as it is about what people feel they personally deserve. It occurs when people compare what they have to others around them. The Cue-arousal theory says that although frustration leads to anger, it doesn't necessarily lead to aggression. There needs to be some associated stimulus to spark the aggression. For example, if you were carrying a pile of heavy books and couldn't get the door open, this would cause you to feel frustration, but not aggression. However, if someone then laughed at you, this may be the cue to aggression. The two other theories of aggression explained above are all different to the social learning theory on aggression, as the social learning theory says that aggression is caused by observation of a model, and imitating another person who is already aggressive. The other theories all believe that something sparks off aggression, such as frustration or tension towards other people or life itself. ?? ?? ?? ?? Aaron shepheard ...read more.