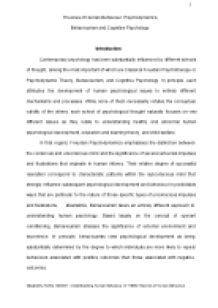 ﻿Theories of Human Behaviour: Psychodynamics, Behaviourism and Cognitive Psychology Introduction Contemporary psychology has been substantially influenced by different schools of thought, among the most important of which are Classical Freudian Psychotherapy or Psychodynamic Theory, Behaviourism, and Cognitive Psychology. In principle, each attributes the development of human psychological issues to entirely different mechanisms and processes. While none of them necessarily refutes the conceptual validity of the others, each school of psychological thought naturally focuses on very different issues as they relate to understanding healthy and abnormal human psychological development, education and learning theory, and child welfare. In that regard, Freudian Psychodynamics emphasises the distinction between the conscious and unconscious mind and the significance of several universal impulses and frustrations that originate in human infancy. Their relative degree of successful resolution correspond to characteristic patterns within the subconscious mind that strongly influence subsequent psychological development and behaviour in predictable ways that are particular to the nature of those specific types of unconscious impulses and frustrations. Meanwhile, Behaviourism takes an entirely different approach to understanding human psychology. Based largely on the concept of operant conditioning, Behaviourism stresses the significance of external environment and experience. In principle, behaviourists view psychological development as being substantially determined by the degree to which individuals are more likely to repeat behaviours associated with positive outcomes than those associated with negative outcomes. ...read more.

The most important element of behavioural psychology is the concept of operant conditioning, coined by Skinner, to describe the manner in which organisms develop patterned responses through the process of operating within their natural environment. More specifically, Skinner conducted empirical experiments to establish the significance of both positive and negative reinforcement, reinforcement schedules, punishment and reward, shaping, and the gradual desensitisation to aversive stimuli (Berk, 2010). Typically, Skinner relied on laboratory rats that were taught to associate certain experiences with specific expectations corresponding to those types of experiences. He also experimented on his own infant daughter by recording her responses to various (benign) parental experiences that were controversial and that would be absolutely prohibited by contemporary ethical guidelines that govern all human psychological experimentation (Overskeid, G. 2007). Clinical Application of Behaviourist Psychology Unlike psychodynamic psychological therapy, behavioural therapy is extremely applicable to the educational environment, both in connection with classroom learning and also in applications designed to address behavioural conduct issues (Gross, 2010). In principle, behaviourism involves the exposure of subjects to conditions and choices that regularly correspond to outcomes that are predictable and that are perceived either positively or negatively by the subject (Doherty & Hughes, 2009). ...read more.

level, such as in connection with using light therapy to treat post-traumatic stress disorder (PTSD) and other related conditions (Westbrook, D & Kirk, J. 2005). That approach is especially useful in the social work and foster care settings in connection with children who exhibit symptoms of depression or PTSD as a function of abuse or neglect in their previous family environments. Conclusion In the history of modern psychology, Freudian psychotherapy provides foundational concepts that are invaluable for understanding and addressing those forms of abnormal psychology that relate to the concepts of the subconscious mind first introduced by Freud. Behavioural psychology allows psychologists to incorporate the influence of environmental experience in the formation of patterned responses linked to those experiences. Cognitive psychology outlines the types of mental processes and capabilities associated with and dependent on chronological age in early development. Freudian psychology is infrequently relied upon in its original formulation as is not particularly useful in educational applications. Behaviourism is extremely useful in addressing and correcting psychological problems caused by negative environmental experiences and provides valuable tools to better understand how different learners benefit from different types of approaches to learning. Cognitive psychology allows educators to design educational curricula and lesson plans that are most conducive to learning for children at different ages and to address certain psychological issues in adults by targeting the underlying brain mechanisms involved in perception and thought processing. ...read more.