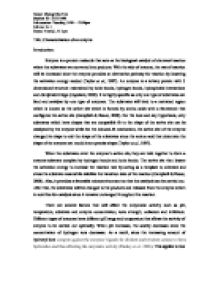 This experiment was carried out to characterize an enzyme, -amylase by extracting it from the corn. The factors affecting the enzymatic activity of -amylase such as substrate concentration, temperature, pH, ionic strength and inhibitors were inves

Title: Characterization of an enzyme Introduction: Enzyme is a protein molecule that acts as the biological catalyst of chemical reaction where the substrates are converted into products. With the aids of enzyme, the rate of reaction will be increased since the enzyme provides an alternative pathway for reaction by lowering the activation energy needed (Taylor et al., 1997). An enzyme is a tertiary protein with 3 dimensional structure maintained by ionic bonds, hydrogen bonds, hydrophobic interactions and disulphide bridge (Copeland, 2000). It is highly specific as only one type of substrates can bind and catalyze by one type of enzymes. The substrates will bind to a restricted region which is known as the active site which is formed by amino acids with a framework that configures the active site (Campbell & Reece, 2008). For the lock-and-key hypothesis, only substrates which have shapes that are compatible fit to the shape of the active site can be catalyzed by the enzyme while for the induced-fit mechanism, the active site of the enzyme changed its shape to suit the shape of the substrates since the amino acid that determine the shape of the enzyme can mould into a precise shape (Taylor et al., 1997). When the substrates enter the enzyme's active site, they are held together to form a enzyme-substrate complex by hydrogen bonds and ionic bonds. The active site then lowers the activation energy to increase the reaction rate by acting as a template to orientate and stress the substrate meanwhile stabilize the transition state of the reaction (Campbell & Reece, 2008). Also, it provides a favorable microenvironment so that the catalysis can be carried out. After that, the substrates will be changed to the products and released from the enzyme which is now free for catalysis since it remains unchanged throughout the reaction. There are several factors that will affect the enzymatic activity such as pH, temperature, substrate and enzyme concentration, ionic strength, cofactors and inhibitors. ...read more.